I checked out the 1973 and 1975 sets recently and I really enjoyed looking back at the cards I collected as a kid.  Today I continued it with the 1978 Topps baseball card set.

In 1978 I found lots of places to buy current packs of cards.  We probably went to a few card shows since not many existed at that point.  But, at card shows we ignored any cards from the 1970s.  We also bought old cards from the flea markets that used the drive-in movie spaces on weekends.

Since I was still doing a paper route and caddying, I always had money to buy some packs of cards.  I remember putting three sets together that year.  If I put them together now, maybe I can have one set in nice condition.

The 800-count boxes at that time had the flaps on the bottom that would sometimes damage some of the cards.  It looks like this happened to a few of my 1978 cards even though I got rid of that type of box many years ago.

Off to the cards.  I just opened it up and took pictures of any card that jumped out at me.

We always wanted to know which player would get card #1 each year.  My collecting friends and I could also tell you who had that honor in every Topps set.  Why?  Didn't everyone know that?  We really didn't have much else to do after playing sports. 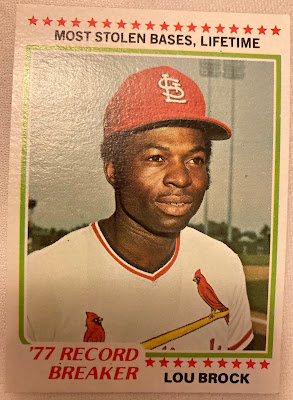 The Grich card reminded me of the fields that I played on at Durkin Park.  It looks like there is no outfield wall of any kind or that it is way out of reach.  Are those trees or a fence? 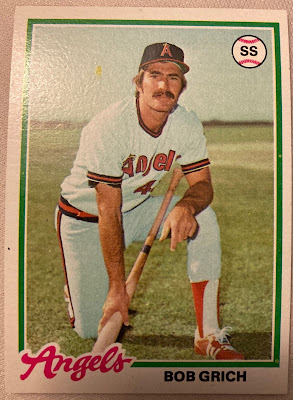 As a Cub fan I never liked Pete Rose because he was so good and he did whatever it took to win.  Still, I thought I was so lucky that I kept getting Rose cards in packs that year.  I think I got almost 20 of them that year.  More on this later. 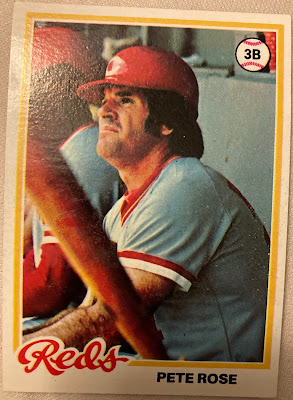 We all wanted cards of Mark Fidrych.  This one is great. 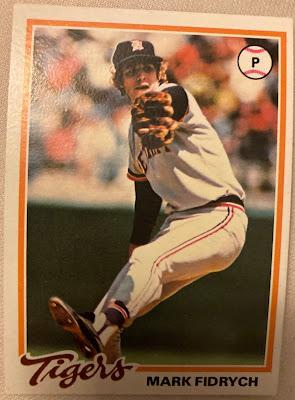 I don't like this trophy as much as the older one, but it is still nice.  Nice Rookies of the Year in 1977 - Andre Dawson and Eddie Murray. 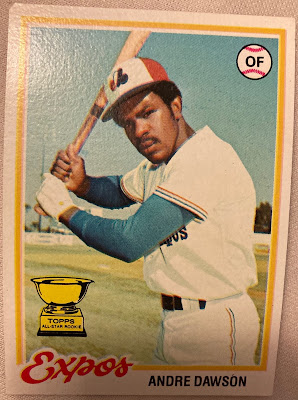 Chuck Scrivener was the first player in the set that I didn't recognize.  I decided to check out his career.  It turns out he never played in the majors after 1977.  His debut was in 1975.  Before looking at what happened let's check this out.  He was a Tiger in the late 1970s trying to break in at 2B or SS.  How does that seem?  Alan Trammell took the shortstop job in 1978 and Lou Whitaker took the job at 2B.  Whitaker was Rookie of the Year and Trammell tied for fourth in the voting.
He played for the Tigers in the minor leagues in 1978 before being released at age 30. 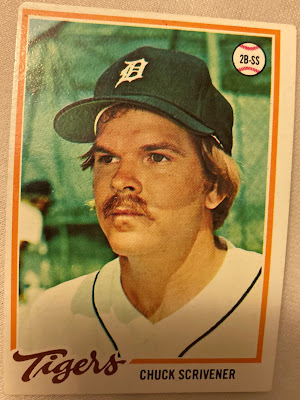 We always liked to see the all-star logos on the cards.  I really didn't like this logo. 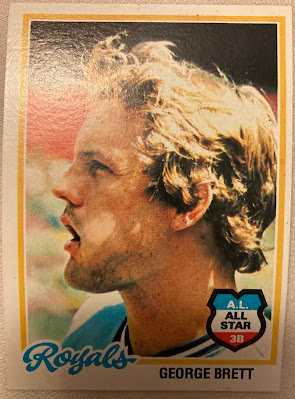 There were not a lot of action shots in the set.  Many of them were like this one of Carter where the action really isn't happening. 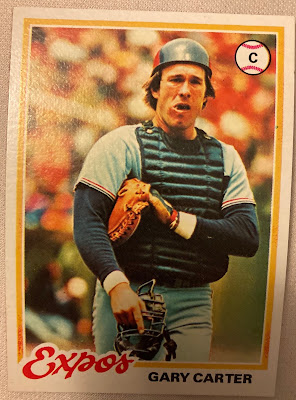 The card backs were okay.  The text is certainly not up to Kellogg's standards.  The game on the right?  I never met anyone that tried to play it.  Did any of you? 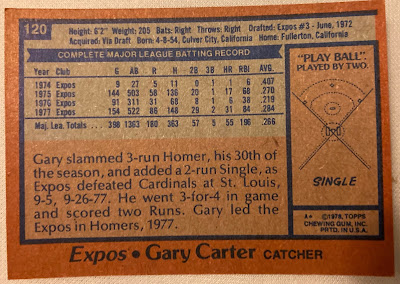 I like this action shot, partly because I like that it shows the crowd.  The uniform, helmet and socks also add up to a great card. 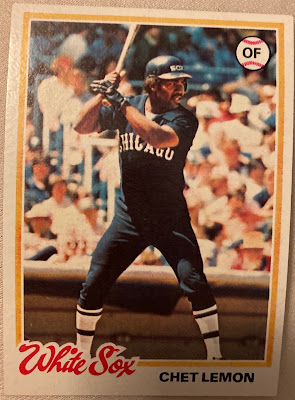 We never liked getting manager cards or checklists.  We need more people like Lasorda in the game. 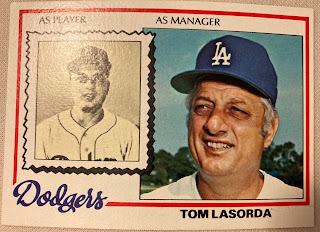 This shot of Doug Alt got me thinking about Opening Day.  I can picture the first batter  stepping in now as Alt is doing.  I didn't know what else to say about Alt so I looked him up.  Alt wasn't a lead-off man in the Blue Jays first game in 1977.  He did hit the first two homers in team history in that game - both off of Ken Brett. 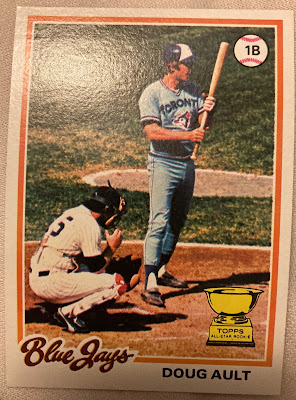 Hunter looks like he didn't throw that pitch very hard.  Was it a warm-up pitch? 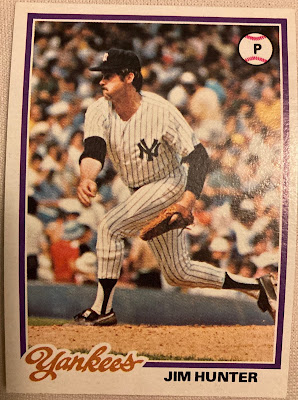 Another action shot?  The 1977 MVP is shown wearing the helmet-hat combo that we always wore as kids.  The cheap helmets from our Little League would slide around too much if you didn't have a baseball hat on under it. 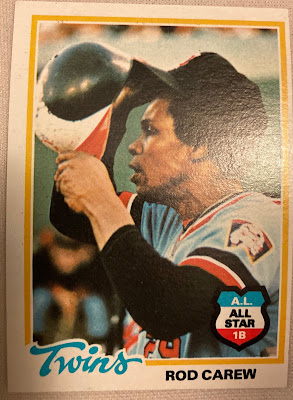 I don't remember the warm-up suit that Grant Jackson is wearing on his card.  They had so many different uniforms and hats so they probably had multiple warm-ups too. 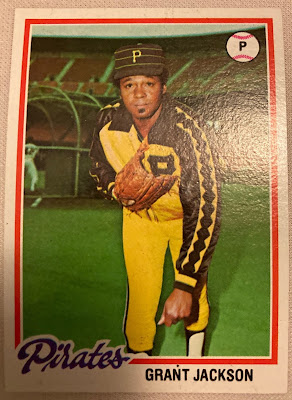 Wait, Wilbur Wood is card #726.  None of us could understand why they had 660 cards and now we trying to figure out how they decided to have 726 cards.
Many years later we learned about the 132-card sheets and how that was used to make sets. 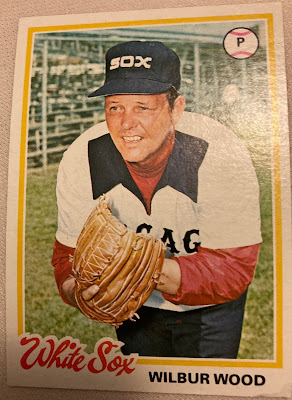 Wait if there are 726 cards and 132 cards on a sheet, that doesn't add up evenly.  Of course I found out later that the reason I got all of those Pete Rose cards because he was printed twice along with 66 other cards.
I think that Mike Lum was more than double printed.  My lasting memory of buying 1978 packs was this - I got 22 Mike Lum cards during that year from packs.  I still have them somewhere.   That was easily the most of got from any player until I bought a mountain of 2000-01 Ultra basketball card boxes.  I still have those too, but I am probably getting rid of most of my football, basketball and hockey cards unless they were part of my childhood collection.
Is Mike at Durkin Park without an outfield fence? 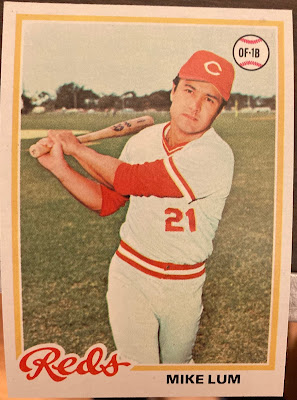 Posted by RunForeKelloggs at 5:38 PM