Unopened Kellogg's Cards - Does Anyone Get Them Graded?

I mentioned recently that I finally made a purchase on ebay last week.  Here are those cards. 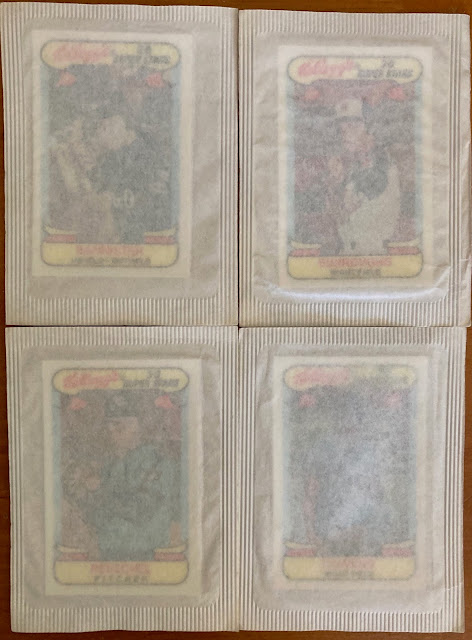 I bought the cards because of the Don Sutton.  Being the last card in the set, even my unopened version of Sutton needed an upgrade.  This Sutton isn't perfect, but it works for me.
Getting a Cub and a White Sox card certainly made this purchase even better. 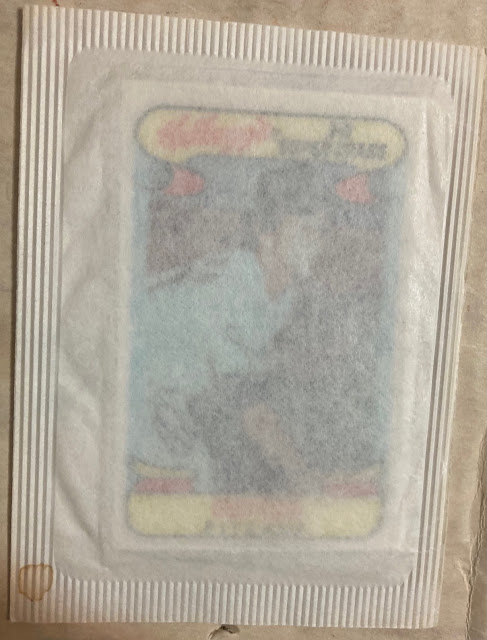 Unopened 1978s seem more plentiful than either 1977s or 1979s.   Unlike unopened vintage packs, there is little temptation to open them since it is known who is included.  The temptation got to me with the Kellogg's Upper Deck basketball packs and a few of the 1970 Kellogg's six-card packs.

Since I've yet to send anything in for grading, that didn't tempt me either.  Have any of you opened a Kellogg's card to then send it in for grading?

I have some of my Hostess cards from the 1970s as well as some of the three-card panels.  I never collected full boxes like the one below.  Now, I prefer the full boxes because I get the memories of both the cards and the treats that I ate way too often during those years. 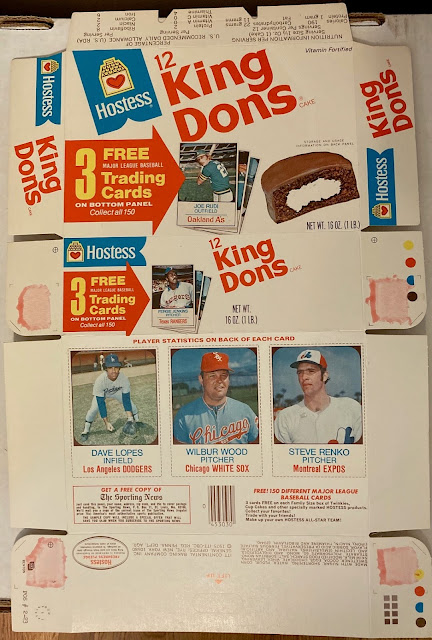 Some of these 1975 complete boxes are easy to find online and they are not that expensive.  Other boxes can cost a lot more money.

Does anyone collect these boxes?  Before COVID I got 45 different full boxes.  I have 22 duplicates that I hope will help me get a few more different ones.

Posted by RunForeKelloggs at 4:30 AM 5 comments:

Kellogg's Proof Cards / Benanti Collection - Have You Ever Seen One That Wasn't Included in the Set?

I have this Rusty Staub card, which is a 1970 Kellogg's baseball card.  Well, it is a proof card.  Has anyone seen other examples like this where the player wasn't included in the actual set for that year?  I know it has happened with other card sets, but what about Kellogg's? 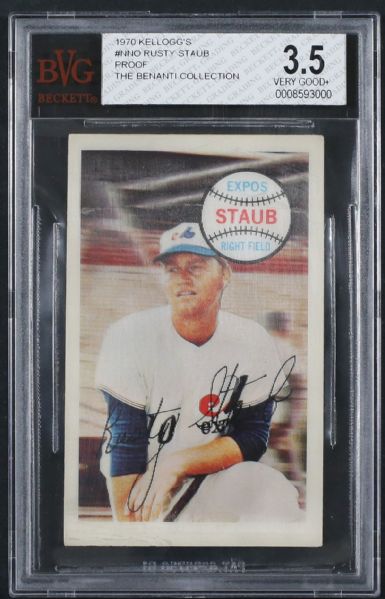 This card came from the Benanti collection.  Beckett was auctioning off parts of that collection many years ago.  The family had many more items headed to Beckett auctions but for some unknown reason they pulled the items back.  The general consensus was that their first few auctions didn't net them the dollars that they expected.

Did the Benanti collection ever go to another auction house?  Did any more proof cards show up?  If you've seen anything, let me know.  I'd love to see more unique Kellogg's items.

Posted by RunForeKelloggs at 3:30 AM 3 comments:

Card Shows and Online Shopping - Nothing Worked This Year - How About Trading?

I haven't really been able to drop things from want lists this year via the normal channels.  Time to try another approach.  Does anyone want to trade?

Yes, everyone needs Clemente, Ryan, Rose, etc.  How about getting rid of some of these cards that I need?  I have my full want list on the side of my blog, but here are some of the less expensive cards that I seek.

I have some Bruce Sutter cards to trade, but the above is not available for trade.

Posted by RunForeKelloggs at 7:26 AM No comments:

I attended the show today and I had unlimited time, so it was quite enjoyable.  Sure, I only stayed two hours, but that allowed me to do everything that I wanted to do.

These small purchases add up to being the most cards I've picked up in a long time.

Why did I stay only two hours?  I enjoyed spending time at many tables, but I don't collect new cards much or Pokemon cards at all, so that allowed me to skip a lot of booths.  There was a better variety of displays than usual.  Besides the old cards, there was lots of pennants, oddball cards, etc.  I enjoyed looking at lots of that stuff, but I didn't see any miscellaneous Kellogg's stuff.

The crowds were quite large.  It seemed like there was lots of buying going on around the room.  The autograph section of the room was crowded, but I didn't go to that area at all. 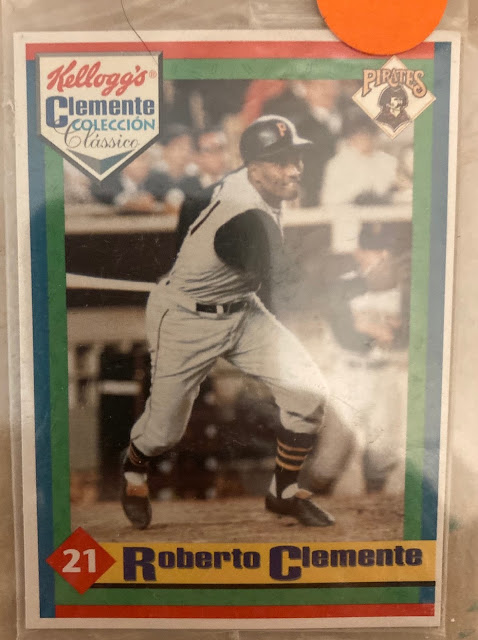 I was surprised to get this Roberto Clemente card.  I've only see any of these cards at the National.  Sure, I've found them on ebay, but they don't show up at a decent price often.  This one is still in the original wrapper. 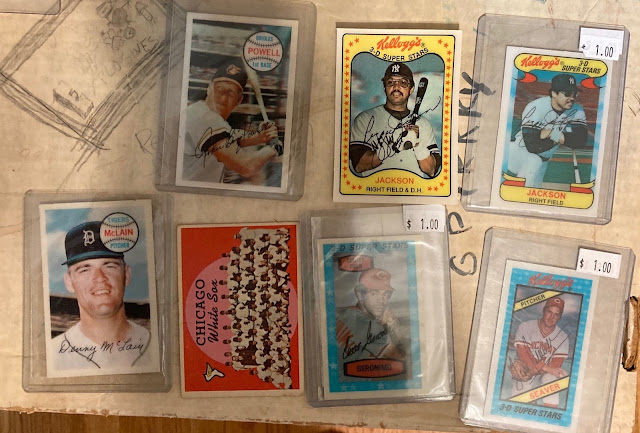 The 1959 White Sox team card drew me to a 50-cent box.  Odd, since I am a Cubs fan.  In that box I found a bunch of the Kellogg's cards shown without top loaders.  Boog Powell and Denny McLain seem to be hard for me to find in nice condition. 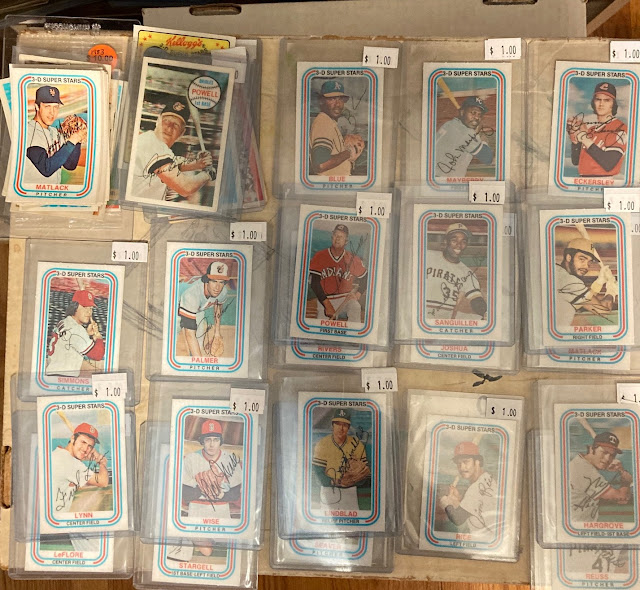 I found another stack of 1976s that I bought for $1 each.  A few of these cards, like Eckersley, have backs that are off center.  The front looks fine, so that is enough for me.

One dealer had a huge lot of 1975s and they were mostly without cracks.  I was prepared to overpay a bit, but he didn't have Jon Matlack or Johnny Bench.

I posted a while back about the 1976 Mike Hargrove and its print marks  - 1976 Mike Hargrove Print Marks.  Someone wondered how I had so many of this card.  Well, as usual, I came home with two more of them today.  Hard to pass up in nice condition for under $1.

I have yet to check to see which variations I have for the 1976s.  I think the only one I need is Kaat, and he wasn't found today.

The experience today makes me want to go to another show before the end of the year.  I will have to check the schedules.

Did any of you attend the show?

Posted by RunForeKelloggs at 3:20 PM 2 comments:

Additions to My Collection This Year - Card Show Next Week?

Today is my first Saturday off since the Spring and I looked at what I purchased during the year.  Ugh.  Other bloggers have mentioned how Kellogg's prices have increased since COVID.  That happened with all cards for a while, but Kellogg's cards haven't really dropped back down in price.

Part of me says that it great because I have a lot of Kellogg's cards.  My kids would say I have way too many of them.  But, I want to get more to find some of the variations and oddities that I don't yet have in my collection.  Current prices are keeping me from getting more cards.

When looking at what I've picked up, it wasn't even worth taking pictures.  Here is the complete list from the last six months -

1974 Ed Goodson - needed to replace a damaged one

That's about one purchase per month.  Ouch.  Before COVID I was probably buying a few things every week.

There is a show in Rosemont, IL that I plan to attend next weekend.  I rarely find anything I want theres, but it is usually fun to check out the show.

The flea market that I prefer opened on Sunday and I was able to check it out.  Between COVID and a golf course job, I hadn't been to this place in a few years.

I enjoyed a nice walk through the place, even though it was windy and cold.  Lots of people were selling cards and even some Starting Lineups.  I picked up a few sets (1986 and 1987 Topps) because they were $3 and they looked to be in great shape.

The $3 bin also had a couple of basketball sets from the junk wax era, but they had Jordans as well as a few cheaper insert sets so I grabbed them too.

That price led me to grab a few other smaller sets.  I didn't spend a lot of time checking the sets before buying them because if they didn't take the Jordans, they certainly didn't take out other stars.

One 400-count box was labeled on the side as some football set that I didn't want.  When I put it down I noticed that they wrote Schilling on the side.  I opened it to find only Curt Schilling cards - 400 of them.  No rookies, but probably a nice lot for someone.  Who in Chicago kept all of those cards of Schilling?   Does anyone want to trade for a box full of Schillings?

Posted by RunForeKelloggs at 4:49 PM No comments: