The countdown ends with card #1 - Walter Johnson.  He is labeled the Greatest Pitcher - Right-Handed. 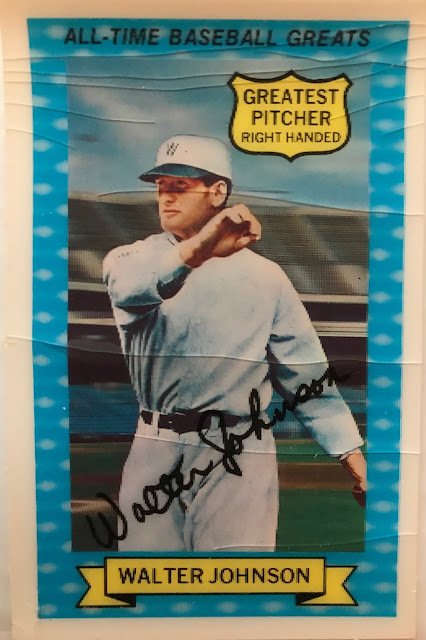 He is believed to have the greatest fastball in the game.  He's mentioned as being tall and lean.  That might have been the case when he pitched, but baseball-reference.com lists him as 6-1 and 200 pounds which in total's game doesn't make him tall at all. 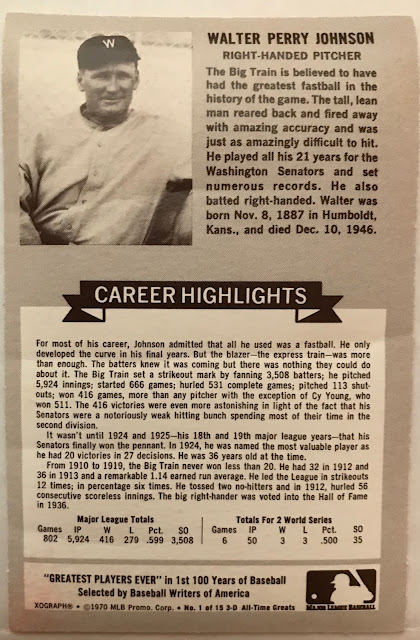 The card mentions his impressive career totals with Senators teams that finished in the second division - the bottom half of the standings.  There is a reason that Washington was mentioned with this line - "first in war, first in peace and last in the American League".

They reached the World Series twice near the end of his career and they managed to win once.

The team was in Washington for 60 years.  The won three pennants but they averaged being 26.5 games behind in those years.  Here is a breakdown of those years.

That's 10 years being over 40 games out of first place and 46 years being at least 20 games out.
Posted by RunForeKelloggs at 4:00 AM No comments:

I am going to finish learning about these players and reading the backs of their cards.  Once again, the back is from the 1970 Rold Gold set.

This card features the Greatest Second Baseman as determined by the Baseball Writers of America after the first 100 years of baseball - Rogers Hornsby. 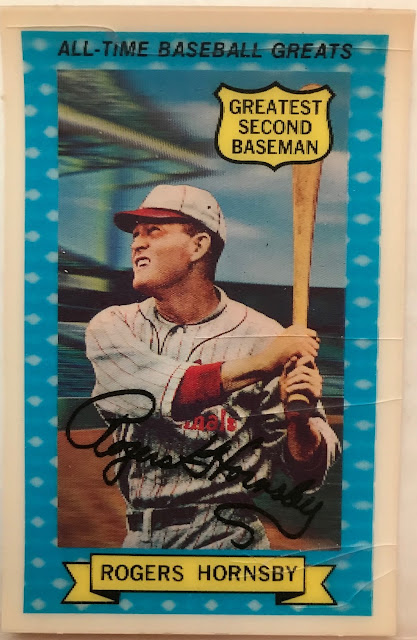 I first learned about Hornsby's hitting by playing a baseball board game that a neighbor had.  Was there a Strat-O-Matic version that had sheets for the all-time best players from each team? 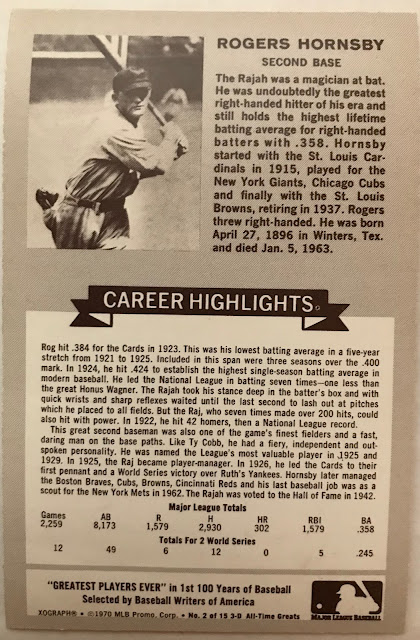 As of 1969 Hornsby held the highest lifetime average (.358) for a righty.   That won't change anytime soon.  He's also second all-time to Ty Cobb, something I learned from Topps in 1973.

The card says he played for four teams, which seems like a lots for star player in that era.  He actually played for five - they missed the Boston Braves.

He had the highest single-season average - .424.  He led the league in batting seven times.   Like others from this era, averages are higher since the league averages were the highest ever seen in baseball.  (Cochrane's Card From This Set).  I knew all of that but I didn't know that he held the NL HR record when he hit 42 in 1922.

His last baseball job was as a scout for the Mets.  Not something to brag about since that was a horrible expansion team, but he made his debut in 1915 and he was still in baseball in 1962.  He did in January of 1963, so I assume he didn't even retire.
Posted by RunForeKelloggs at 5:11 AM No comments:

John McGraw was given the honor of being named the Greatest Manager.  Even though I've been a coach for a long time, I've never spent much time reading about managers.  I will probably learn a few things about him.

He had two nicknames - Mugsy or Little Napoleon.   He managed until 1932, 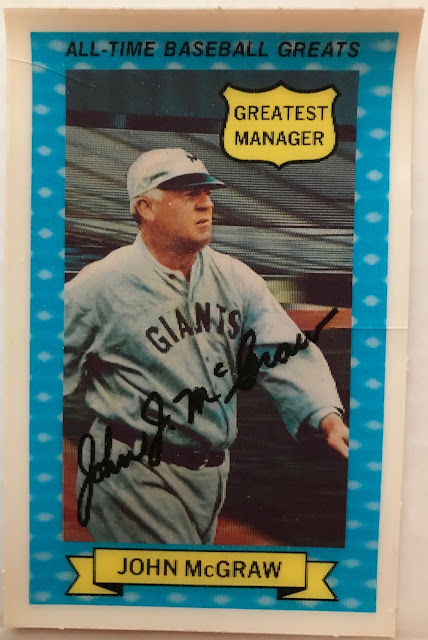 He had a "riotous, successful 30-year career with the New York Giants" says the card back.  He is also mentioned as being an innovator.  The card credits him with the hit-and-run and specific situational bunting.

This is stuff that won't be put on a PC card today.  It is mentioned that McGraw insulted rival owners and managers and also used his fists on the field?  Now we freak out over a bat flip following a home run.

He's also considered the first manager to hire someone for pinch-hitting only as well as someone for relief pitching only. 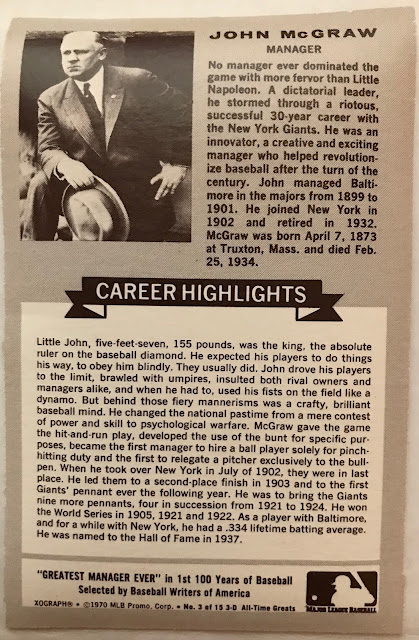 He is still second all-times in managerial wins, trailing Connie Mack by almost 1,000.  Mack coached 53 years and even with a losing record over his career, that record is probably safe until a computer ends up managing a team.  McGraw had a .586 winning percentage.

Posted by RunForeKelloggs at 6:34 AM No comments:

Sorry, I got a bit lazy with the photos.  This one and the next three are pictures from the 1970 Rold Gold Set, but that is close enough.

The Greatest Catcher was declared to be Mickey Cochrane.  I needed to learn more about him since his name doesn't come up as one of the biggest stars in baseball history. 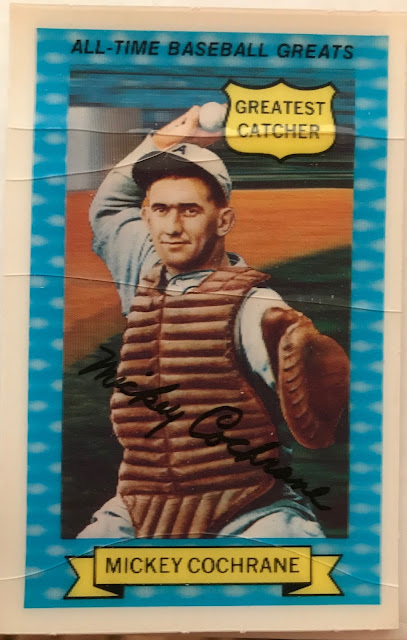 Wikipedia said he was called Black Mike because of his "fiery, competitive nature".    He had a .320 career average, which was the highest for a catcher until 2009 - again according to Wikipedia.  Joe Mauer was the new leader at that time.  Mauer's average subsequently dropped to .306 so Cochrane is back on top.

It certainly helped that Cochrane played in an era when batting averages were higher than in today's game.  Of the top 10 AL season averages, five occurred during his career and the other five were from 1920 - 1924. 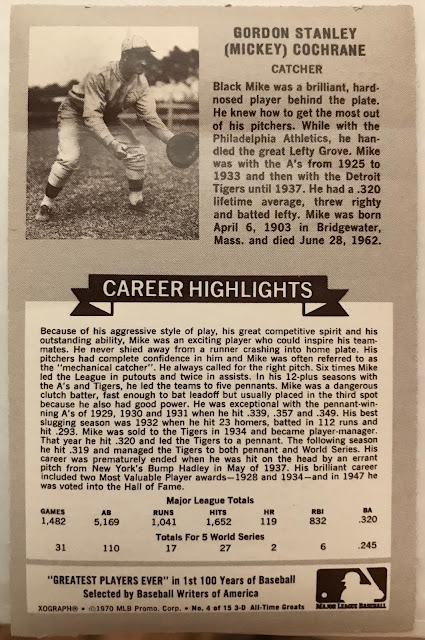 His is credited with inspiring his team and working well with the pitching staff.

His career ended after he was hit in the head by a pitch by Bump Hadley in 1937.  He was still just 34 years old.

He was a two-time AL MVP although the MVP voting rules were different back then.

Posted by RunForeKelloggs at 1:17 PM No comments:

Reminding Myself Why I Do This Blog

I got a Kellogg's card in the mail today. 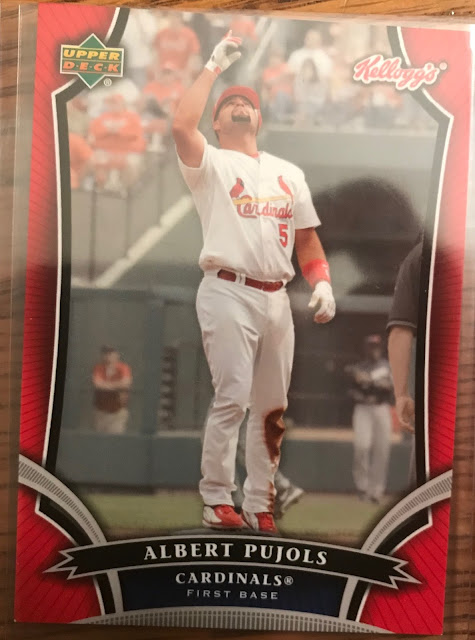 I had three reasons for starting this blog.  First, I wanted an easy way to find Kellogg's information when I am at a card show.  Why?  I can't keep track of all of the sets, packs, etc.  Adding my want lists to the blog was a goal.  If I had put the Japanese Kellogg's want list on the blog it would have been easy to find out if I needed this card.

Second, I wanted to spend time reading the backs of the cards like I did as a kid.  These are not an investment for me as much as they are a hobby, even if I do buy too many of these cards.  Am I a hoarder?

Lastly, I figured I'd also meet some collectors who are interested in Kellogg's cards.

The design of the Pujols card is one of my favorites.  I find these so rarely that I can't remember who I need.  I am collecting them in the package and out so that makes it a challenge.

Does anyone have these cards from Japan in their collection?

Japanese Kellogg's Sets - pictures front and back
Posted by RunForeKelloggs at 9:10 PM 8 comments:

A Busy Week Here - No Kellogg's News Either

This week I started my summer job at a golf course.  Today I put the golf clubs in the trunk even though I have probably played 10 rounds in the last 10 years.  I also took out the snowshoes from the trunk since I hope not to use them any more this season.

To make the week busier, I took my track team out of town for two days for a meet five hours from home.  I was hoping to come home to two packages from ebay purchases but nothing arrived.

I missed out on a card show and there are none that I see myself attending for a while.  Maybe I will get time to check out a flea market.


Posted by RunForeKelloggs at 4:15 PM 3 comments:

Here are the results -

There are only three Hall of Famers in the last 15 cards.  In this break all three of them were in this pack.  Nice.  Too often, these packs have no Hall of Famers.

Here is a breakdown of each 15-card range -

The first 15 cards give you the best chance of getting the big stars.  The last two sequences have the least chance.

I've now found data of 31 packs that have been opened.  Every pack has followed the same pattern.  All cards in these packs has fallen into one of the 15-card ranges shown above.

Posted by RunForeKelloggs at 11:01 PM 2 comments: