It's taking a while to get through this 15-card set even though it is one of my favorites.  I've been busier than ever since my summer job has begun.  I only spent four hours on it this week, but teaching and coaching are quite time consuming now.

Sisler was a first baseman finalist.  Not easy to get past Lou Gehrig on this team.

Ballplayers called him the perfect player because he hit for average and power and he could steal bases.  Twice he was able to hit over .400.

Let's see what baseball-reference.com says to back that up.  A .340 career average is a good start.  75 steals and 102 homers when the home run wasn't as common as it is today.  That average is good for 16th all-time.

The second paragraph on the back of the card.  I never knew that he sat out an entire season since a sinus problem affected his vision.  It is mentioned that he was on a pace to break Ty Cobb's records until he was derailed a bit by this problem.  It also cost him 3,000 hits since he ended up with 2,812.

Two of his sons (Dave, Dick) played in the majors.  Dave had a 38-44 career record over seven years.  Dick had 55 homers over eight seasons.  Their careers didn't overlap since Dave is 11 years younger than his brother.
Posted by RunForeKelloggs at 8:26 PM 1 comment:

Has anyone sent one-card packs to get graded?  How much does that cost?

I own some PSA cards due to purchases that had a few included, but I don't own any PSA-graded packs.  Has anyone picked any up?

Here is what I found by checking the PSA population report.

I didn't notice any on SGC.  Are people using BGS for these cards?
Posted by RunForeKelloggs at 5:25 AM 1 comment:

A 15-card set with two Babe Ruth cards.  I haven't heard anyone complain about that either.  Time to take a look at the backs of the cards. I pictured the first card from the 1970 Rold Gold set and the second one from the 1972 Kellogg's All-Time Greats set.  There isn't any difference other than the copyright line on the bottom.

Ruth is the all-time home run king and basically amazing in all facets of the game.  He's mentioned as the Sultan on Swat.

The bio begins by talking about how he came into the league as a star pitcher.  One of his records was hitting 60 homers in a 154-game season.  This bitterness towards Roger Maris still lingered I guess. 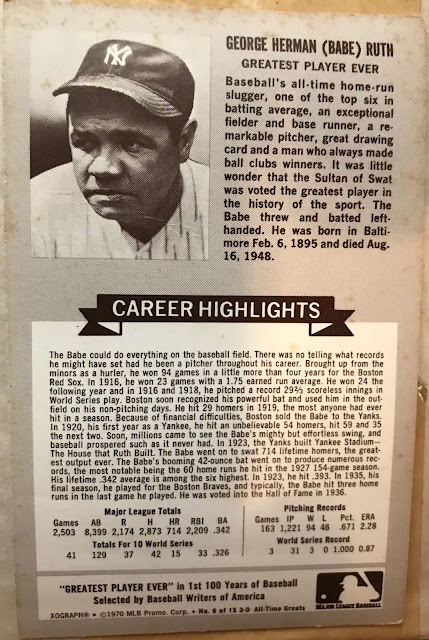 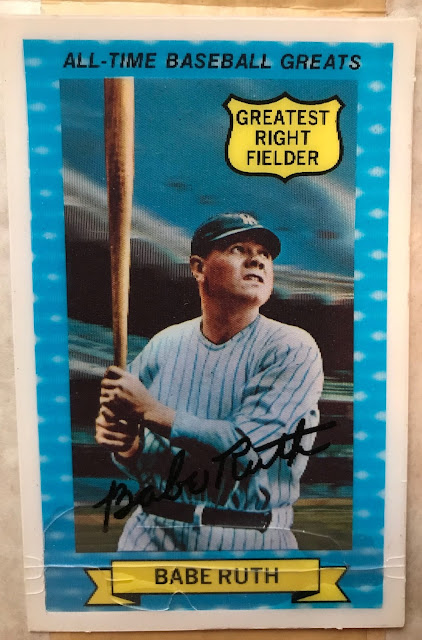 Both cards mention his pitching feats and sale from the Red Sox to the Yankees.  It is also noted that he drew the fans to the ballpark.

His Word Series pitching performances are mentioned on both cards as well. 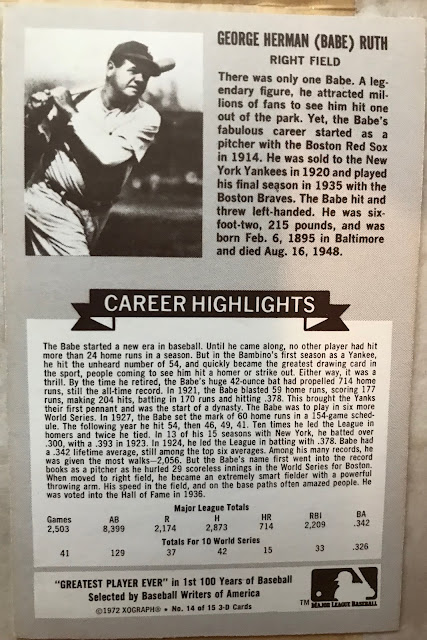 Posted by RunForeKelloggs at 6:53 AM No comments:

This pack had Tommie Agee on the front.  Since he is card #11 I knew that the odds were good for getting Rose, McCovey, Seaver, Sutton, Mays, Marichal, Frank Robinson.

I'm still working on where the split is in the packs and this pack reinforced things since there were no cards in the #16 - 30 range at all.

I've only opened one pack with a card on front having a low number.  It was also a pack with Agee on the front.  My pack had McNally, Seaver, Wynn, Mays and Maloney.

All of the cards from both packs were among the first 15 cards in the set.
Posted by RunForeKelloggs at 3:17 PM 1 comment:

Email ThisBlogThis!Share to TwitterShare to FacebookShare to Pinterest
Labels: 1970

I Decided to Sort my Unopened Kellogg's Packs

I don't ever find enough time to sort my cards, Kellogg's and others.  I decided that I could at least sort the unopened Kellogg's cards since there aren't very many.  In fact I have none from 1975.

As is my custom, I didn't finish.  I did manage to figure out which ones I don't have from the years where I have enough to attempt to finish the set.  I was surprised to find out that I don't need many to complete my 1977 unopened set - just nine to go.  I added my want lists to the right side of the blog in case anyone would like to trade with me.

I bought some unopened 1979s recently and I now have every card except one, Ross Grimsley.  After sorting them I realized that I need only 10 cards to have a complete first run unopened set (Registered symbol in the scarf) and only 19 cards to complete the second print run (Registered symbol below the scarf).  Here comes another project that could take forever. 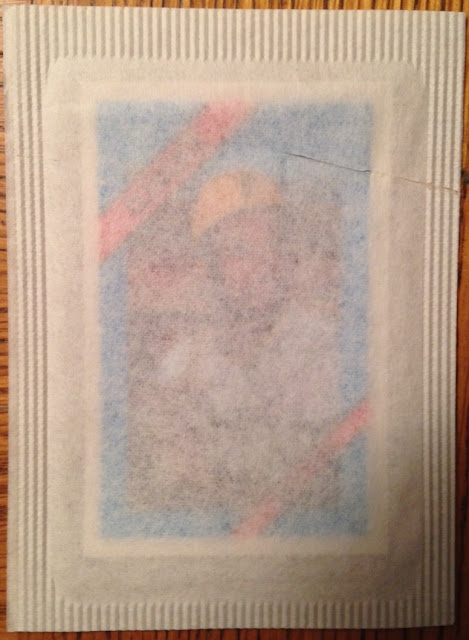 As one can see from the Clemente above, I am not looking for perfect cards and perfect packages.  I do prefer that the card not be obviously damaged in any way or stained by the cereal.

Posted by RunForeKelloggs at 3:30 PM No comments:

I don't do a lot of things quickly with my cards.  Teaching, coaching, training and family stuff take the bulk of my time.  I also decided to take a summer job since I teach at a private school.  Busy times are good times.

I did finally managed to get the last two cards that I needed for my 1979 Kellogg's first print set.  I got Yaz and Brett today.  Both are in the original package, where they will probably stay, but that counts.  At least I know that they exist.

Now I've got to finish the other print runs.  It has been so long since I started this and so long since I've added to my checklist that I have to now remember which ones I need.  That is always part of the fun. 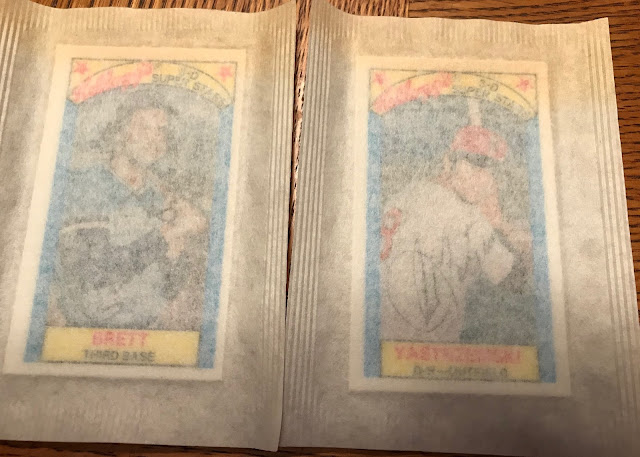 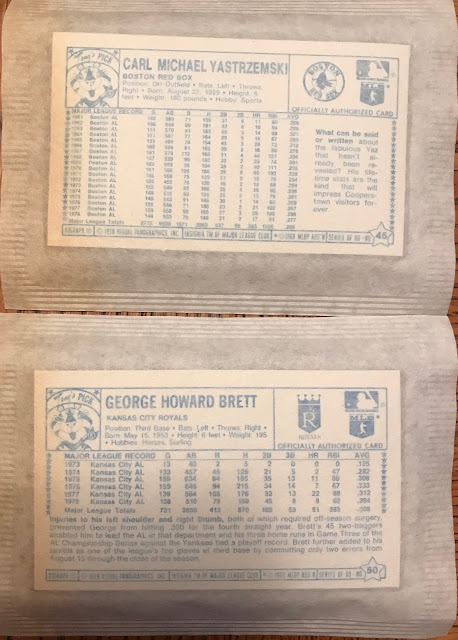 Posted by RunForeKelloggs at 6:00 PM No comments:

Who is getting these cards graded?  They look great, but if they don't come back as a 10 is it even worth it? 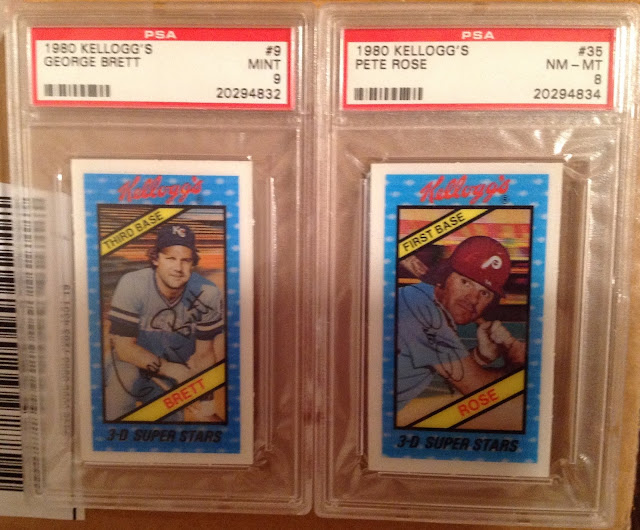 When I hear that the big guys who submit in volume get steep discounts, it makes sense that cards like this can be submitted.

I'm glad that I picked these cards up in a lot because they look great but I still have yet to submit a card for grading.

Have you submitted Kellogg's cards?

What would be the newest cards that you would consider submitted from the Kellogg's sets, not counting the Clementes from the 1990s?
Posted by RunForeKelloggs at 7:44 PM 1 comment:

Email ThisBlogThis!Share to TwitterShare to FacebookShare to Pinterest
Labels: 1980

The breaking site opened the pack with Tommy Harper on the front.  I was correct that every card was over #59.  I didn't get the players correct at all.  The card numbers that came out were 71 through 75 (Gibson, Morgan, McLain, Harper, Mincher)and 62 (Don Wilson).

If you have any other pack data please send it along.
Posted by RunForeKelloggs at 7:14 PM No comments: 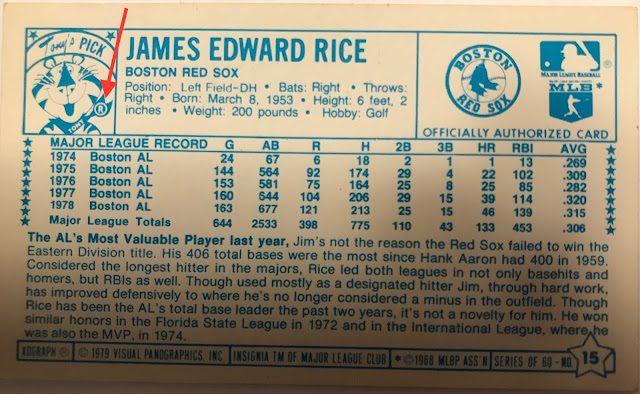 I found another early print run from 1979 Kellogg's this week.  The problem that I am having is that many of these are cracked.  If you've got some of these with the ® symbol in Tony's scarf I'd love to get them for my set.

Why am I trying to get all of the variations?  I really don't need to but it gives me something to do that won't cause me to go broke.

The episode of Hart to Hart about a stolen baseball card collection is airing right now.  I've never seen it or watched that show but I've always wanted to check this one out due to the baseball card link.

Posted by RunForeKelloggs at 7:57 PM 3 comments: