Has Anyone Seen a 1973 Kellogg's Factory Set Like This?

I've seen 1973 Kellogg's blank backs as well as panels with blank backs.  I have no idea how they originated but it isn't difficult to guess.  I would not have guessed this.

The listing linked below has an opened factory set with the wrapper.  There is damage to the wrapper and many of the cards.  The oddity is the idea that six of the panels have blank backs.  Has anyone ever opened a factory set to find only some with blank backs?

If this has happened before, would it be the same panels?  Wouldn't these panels or blank back individual cards be easier to find that the other ones?

Here are the ones with blank backs.

Is it possible that by the way the panels are packaged that the blank back panels didn't get stained like the other panels?
Posted by RunForeKelloggs at 4:50 AM 5 comments:

Email ThisBlogThis!Share to TwitterShare to FacebookShare to Pinterest
Labels: 1973

Does Anyone Know More About this Kellogg's Football Advertising Item?

I've seen this item on ebay only a few times in the last 10 years.  It is a plastic item with four 1971 football cards on it.  It is about 6.5 inches long and maybe one inch high.

It looks like it was used to put on a store shelf in the cereal aisle.  Is that what it was used for?

If it was for the cereal aisle that leads to more questions.  First, does this item exist for any other Kellogg's card products?

I have two of these with the same players shown.  So the second question is are there other versions of this with different players shown?

If it wasn't used in the cereal aisle, then what was its purpose?  Any help would be appreciated.
Posted by RunForeKelloggs at 4:50 PM 4 comments:

Email ThisBlogThis!Share to TwitterShare to FacebookShare to Pinterest
Labels: 1971 FB

Kellogg's let it be known immediately that Bowa didn't have a great year in 1979.  Here is what they started the paragraph stating - "both Larry and his Phillies' employers are looking for him to rebound at the plate this year".  His great fielding was mentioned as he achieved many defensive records.

Let's check out his 1979 season compared to others.

Bowa didn't make any all-star games either after 1979.

I was surprised to see how high Bowa ranked in some defensive categories.  As a shortstop, he is 9th in career assists, 11th in double plays and 16th in assists.  I was even more surprised to see that only six shortstops have played more games than Bowa.

I would have guessed Honus Wagner who played 21 seasons.  Nope.  He didn't play shortstop at all during his first four seasons and he played almost 900 games at other positions.  Wagner died on Bowa's 10th birthday.

The lockdown has allowed me to dig through lots of my cards.  Due to that, My Kellogg's sets are blocked from easy access.  I still wanted to do the post.

Posted by RunForeKelloggs at 6:02 PM 2 comments:

Email ThisBlogThis!Share to TwitterShare to FacebookShare to Pinterest
Labels: 1980

Stuck at Home So I Made Some New Goals

I look at all of my Kellogg's cards frequently but not many other cards from my collection.  I decided that I will look at all 11 of those sets since I haven't looked at them in a long time.  I am starting with 1981 which is one of my favorite sets.  Without looking I knew what my favorite card was in this set, but I took one quick look at pulled out a few other favorites.

I loved the all-star ribbon on these cards.  Since packs from this year are still cheap, I bought one a few years ago and it was great to get an all-star card.  I like the Reggie Smith even more since he has the glove in his pocket. 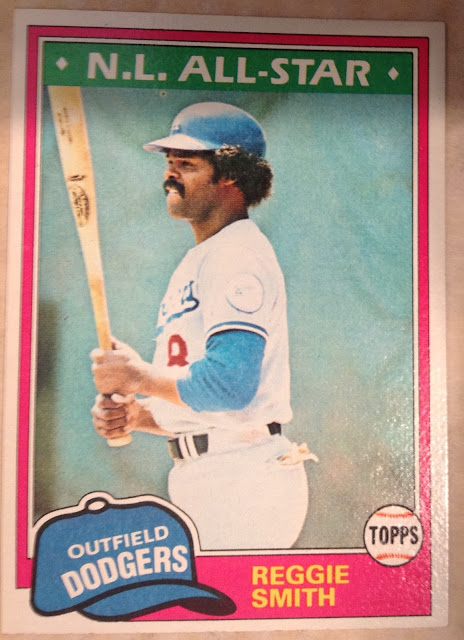 Yaz.  I don't even mind that the photographers weren't able to get a great view of everyone's face.  We already knew what he looked like from other years.  Who is that in the background, Carlton Fisk?  The number makes sense and the high socks certainly help. 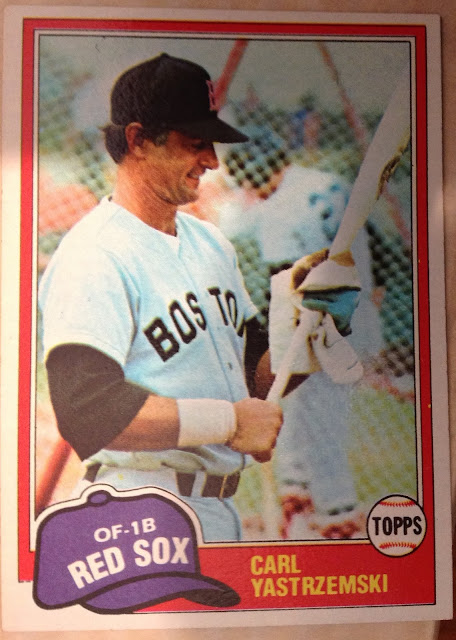 Why Wayne Nordhagen?  I liked these uniforms that they wore for a handful of years. 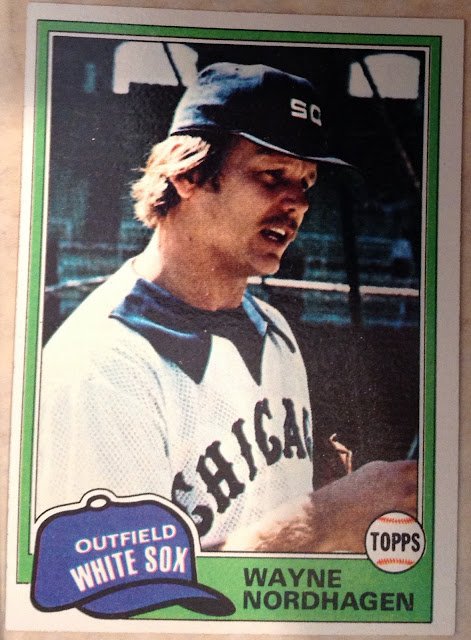 Paul Molitor's card shows me something that I didn't see on old cards very often.  He is definitely reflecting on something that just happened.  That just makes me feel like this was a big moment during a game. 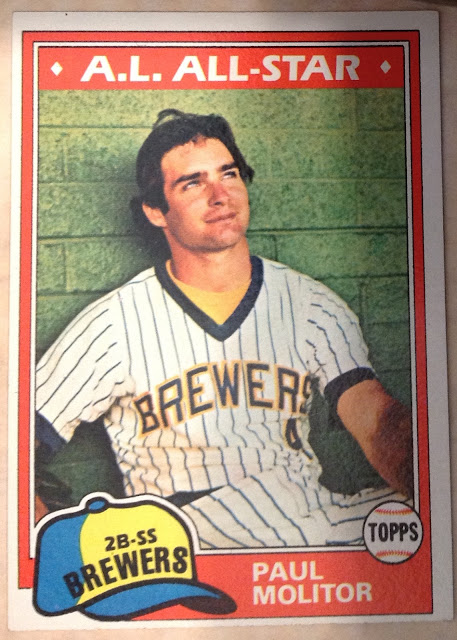 It was always good to get a Mike Schmidt card.  I like the action shot with the crowd in view instead of seeing left field. 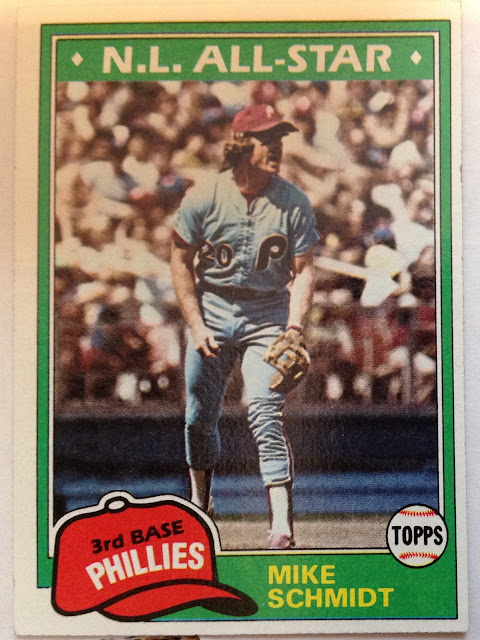 Why did the Cubs team photo always look like this?  I could do some research, but I really don't need to know.  I grew up with it like that so I love the special attention.  The Cubs were quite special during the years I was making sets. 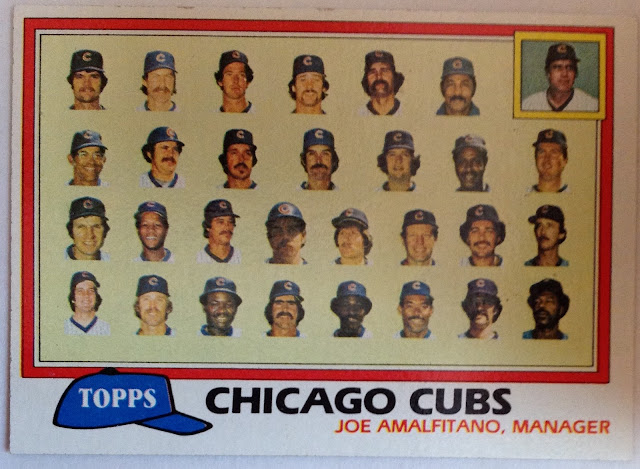 I remember Carter bunting in a game at Wrigley Field.  Two Cub errors later on the play and he had circled the bases. 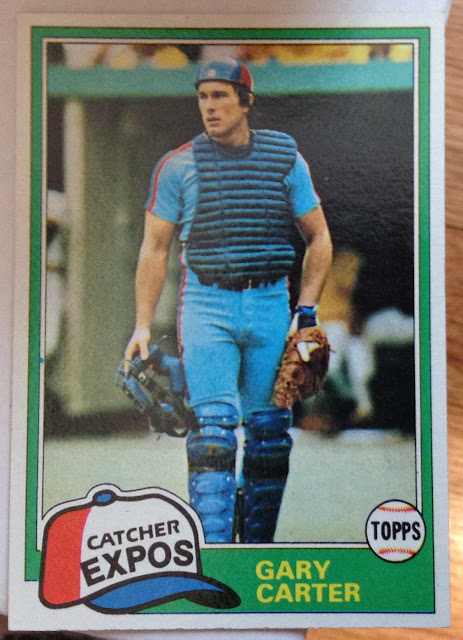 Lastly, my favorite 1981 Topps card - Bruce Sutter.  Why?  I don't have any exact reason but this card has always been a favorite.  Odd for that to be my favorite card since Sutter was traded by the Cubs before this card even came out of a pack. 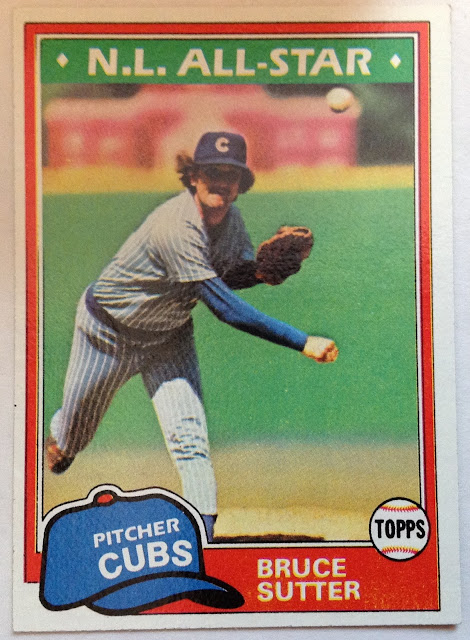 I didn't go through all of the card backs because that takes along longer.  Here are a few that I liked.  Something I saw online suggested that Trammell is still married to that high school sweetheart. 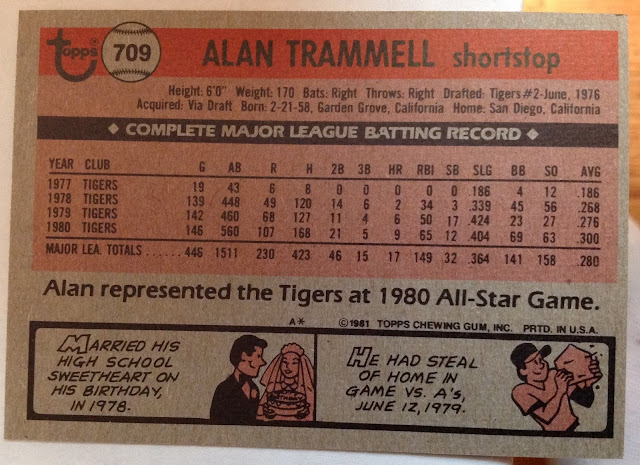 It's great that he sang O-Canada before a game with the BlueJays.  Especially since he is from Georgia.  Waits didn't pitch.  The Indians won by getting a run in the ninth off of Dave Stieb.  The Indians starter, Rick Wise, also pitched the entire game.

I did a quick search to find out if Waits was a singer.  What I learned was that he pitched the last game of the 1978 season and by defeating the Yankees it allowed the Red Sox to tie for first.  That led to the Bucky Dent homer in the playoff game. 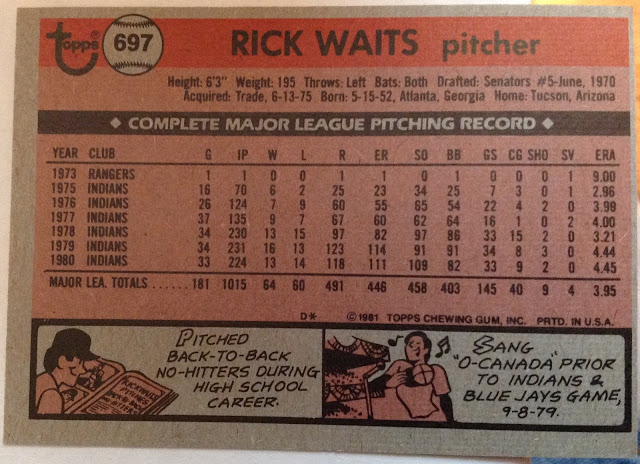 It would be great if I had planned to talk about the Waits-Dent tie-in but it happened by chance.  How could I pass up the cartoon on Dent's card?  Not many players would turn that job down.  Dent hit .372 vs. Waits in 53 plate appearances.  Not bad for a guy with a .247 career average. 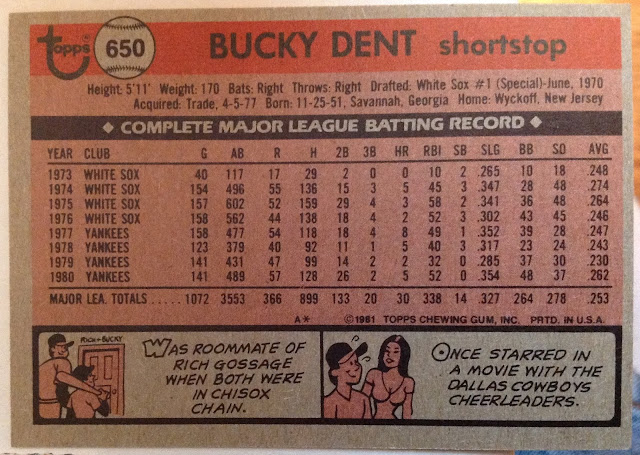 Maybe it is more cool now to collect cards, but we all knew Carter collected back then. 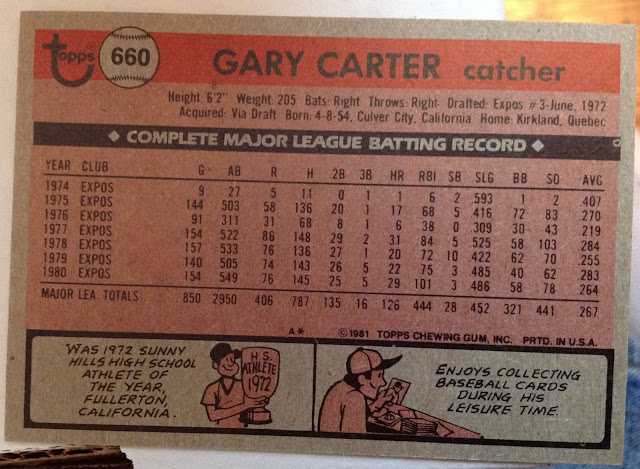 The leader cards from this era were awesome.  My friends and I poured over these and discussed everything about the guys who made this list.  There were certainly some surprises on this list.  Four Cardinals and no more than one other NL team represented on this list.  Three Rangers too.

Thanks to George Brett, the Royals edged the Rangers (.286 to .284) for the highest team average.  The Cardinals were the NL's highest with a .275 average.

Those averages led the Royals to the World Series where they lost to the Phillies.  The Rangers (76 wins) and the Cardinals (74) were far behind the division winners. 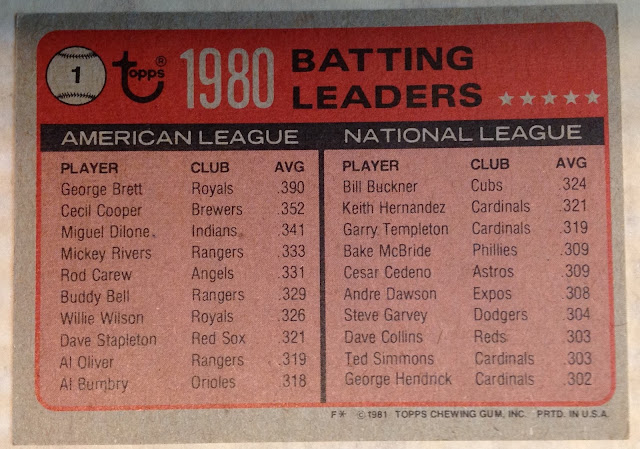 Posted by RunForeKelloggs at 4:05 PM 2 comments:

I just saw a headline about the passing of Al Kaline.  When I started playing pee-wee baseball in 1968 I was placed on the Tigers.  Since I played right field my older brothers let me know that Al Kaline, one of the best Tigers, also played there.

Of course you all know why kids like me, around age 5 - 6, played right field.

Years later I sent a handful of cards away to get signed and I got them all back with beautiful signatures.  I never considered whether they were real or not and I still don't.  That didn't matter.  Some players returned nothing.

When I started going to card shows in the 1970s I was focused on getting his rookie card.  I was normally too cheap to buy any cards in great shape but I splurged and spent $2 on one with colors that made it look new and great corners.  I had another one that wasn't as nice that I ended up trading.

A few years in those annoying, sticky photo albums sucked a lot of the color out of the card, but I still have it.  The cards stuck in there so tight that the edges even got beat up when trying to peal them out of the album.

I made the mistake of trading lots of 1950s rookie cards that I had but I would never part with the Kaline.  I made it a goal to get all of his cards and I accomplished that quickly while they were still cheap.  I look forward to looking at these cards this weekend since there is no school and I am stuck at home like everyone else.
Posted by RunForeKelloggs at 3:04 PM 1 comment:

Here is Portion of a Kellogg's TV Commercial - Does Anyone Have Other Ads?

Dick Butkus is the star of this commercial.

What else was used to advertise these cards?  Did I see these commercials during Saturday morning cartoons? 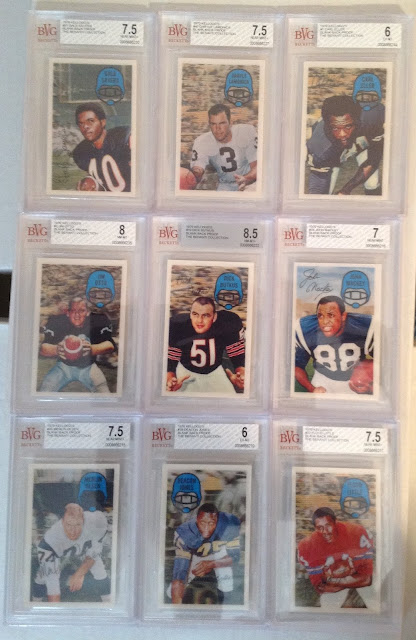 Email ThisBlogThis!Share to TwitterShare to FacebookShare to Pinterest
Labels: 1970 FB

Is Anyone Here Getting This in the Mail? 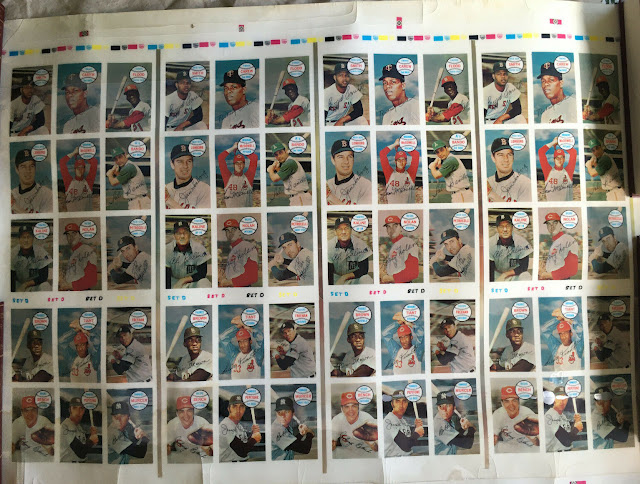 This sold on ebay sometime today or yesterday.  A nice item but it was out of reach for me.  The third sheet would be very tempting if it showed up.  Why?  Five Cubs are on that sheet.
Posted by RunForeKelloggs at 3:30 AM 1 comment: