COVID really impacted my free time.  Last year I just ended up working way too much.  During the school year that just ended the same thing happened since I taught half of the kids in-person while the other half was remote - every period of every day.  I hope to not do that again - ever!

I didn't get to finish looking at the 1980 Kellogg's baseball card backs.  It seems like I struggle to read the small print more each time.  I don't think that this will help the 1980 set when I list my favorite Kellogg's sets.

Back to the countdown -- 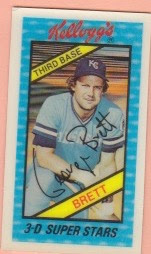 These are the same poorly-done scans that I did a long time ago when I started looking at these backs.  I will add all of the good comments instead of getting a better scan.
Brett finished second in the AL in batting with a .329 average.  He led the league with 20 triples.
Not on the card (of course) - only Willie Wilson, Lance Johnson and Curtis Granderson surpassed that total since 1979.
Though not considered a "speed merchant" he stole 17 bases.
Not on the card - he finished his career with 201 stolen bases. 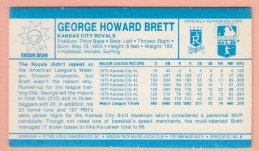 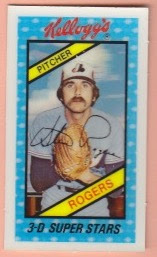 Hobbies - coins, stamps and arrowheads.  I don't remember seeing anything like that before.  Sounds like a guy who would also collect cards and memorabilia from his playing days.
Through 1979 he had the most wins for an Expo pitcher - 86.  He graduated with a petroleum engineering degree from Tulsa.
Not on the card - he played his entire career in Montreal and finished with a record of 158 - 152 for a team that had a winning record on only six of his 13 seasons.
Different era - he had 129 career complete games. 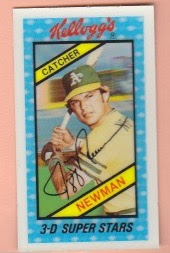 Not a nice start by Kellogg's with the bio - "though still not a high average hitter...".  He was a .229 hitter at this point in his career.
Not on the card - after nine years he ended up with a .224 batting average.
His 22 homers were a team high.
Not on the card - he finished with 63 career homers. 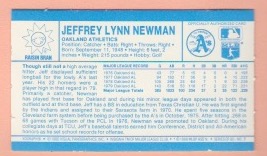 Posted by RunForeKelloggs at 4:40 PM 2 comments:

Another nice article from Sports Collectors Daily.  This time it is 1976 Kellogg's.

This is one of my favorite sets, in part because I was collecting it as a Little League kid.  Over the years I've noticed that this set is likely to have borders that fade to a yellowish tint.  They look great with the white borders, and not so nice when yellowed.

Posted by RunForeKelloggs at 5:39 PM 2 comments: