I really like that this set has lots of text and very little blank space.  Problem - so far the text has been really boring.  I hope there is some better writing ahead. 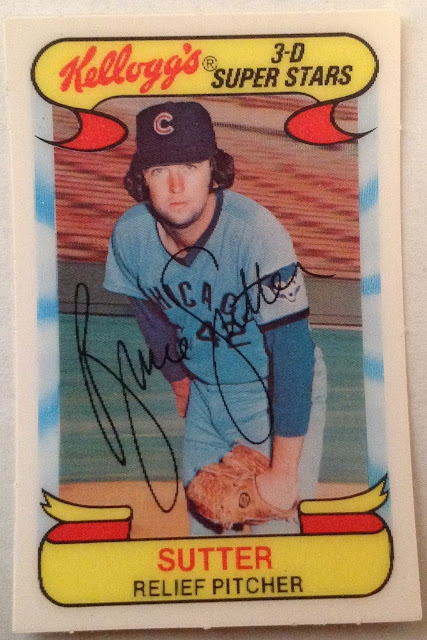 One of my favorite Kellogg's cards.  When Sutter became a closer for the Cubs, things were good.  One problem - the Cubs weren't good enough to make the playoffs anyway.  The 2018 team could use someone like Sutter.

Oddly, the card doesn't even have the save stats on there.

I've always been a Cub fan, but I never heard anyone call them the "Little Bears" like Kellogg's did.

This card is more interesting.  Sutter discovered the fork ball after arm surgery in 1972.  Fred Martin, a Cub instructor, taught him the pitch.  Here is what Wikipedia says about Sutter and the split-finger fastball - https://en.wikipedia.org/wiki/Split-finger_fastball.

Not on the card - baseball-reference.com shows Sutter with 10 saves in 1976.  I guess Kellogg's was wrong. 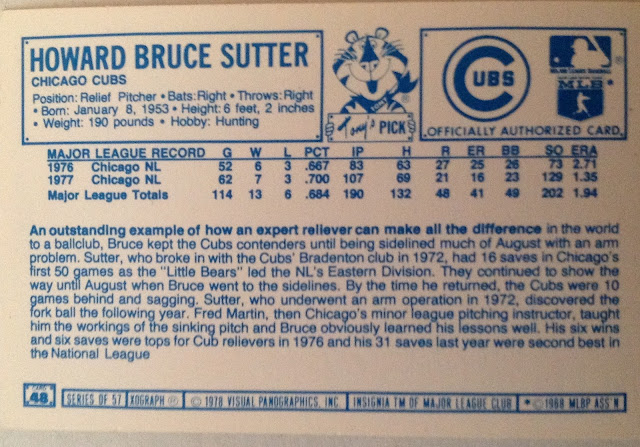 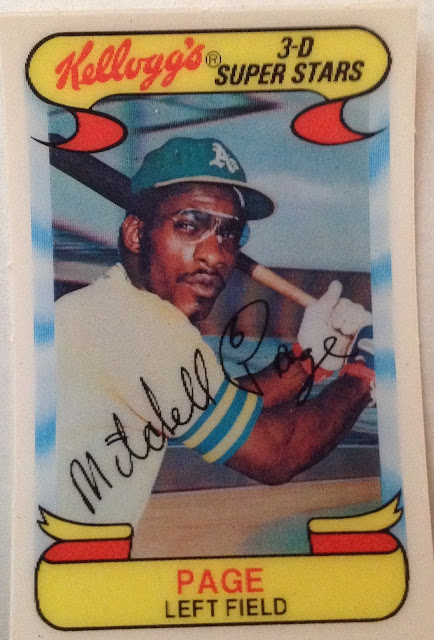 Kellogg's really dissed the A's calling them a "tail-end team" and calling Page "one of the few bright spots".

Not on the card - he was runner up to Eddie Murray in the AL Rookie of the Year voting.

Not on the card - he only played eight seasons.  In only his first four seasons did he get into more than 57 games. 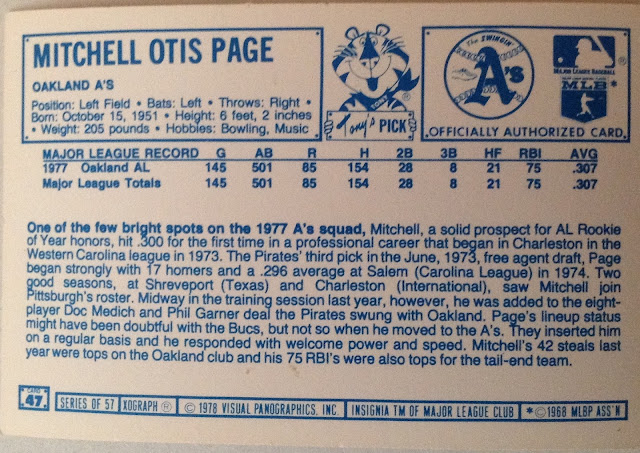 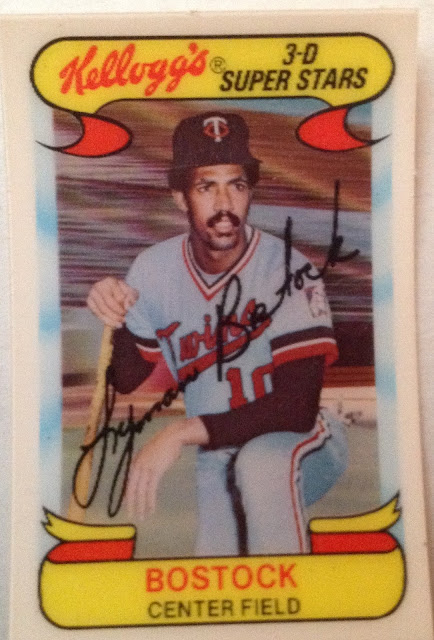 Three seasons and a .318 average.  Wow, this guy was quite the hitter.   And he had Maury Wills helping him with base running.

His father played in the Negro Leagues.  He signed with the Angels late in 1977 - the Angels logo is shown on the back of the card.

Not on the card - he hit .296 in 1978 to drop his career average to .311.  In the last week of the 1978 season after a game against the White Sox in Chicago, he was shot and killed in one of his childhood hometowns -  Gary, Indiana.  I remember reading the story in the paper before doing my paper route that day. 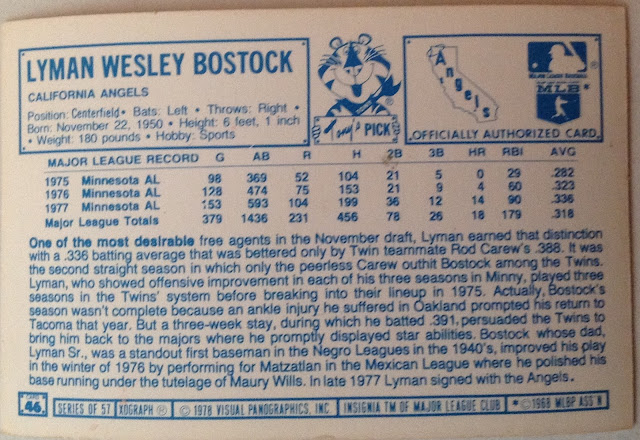 Posted by RunForeKelloggs at 7:12 PM No comments:

Back to check out three more card backs from the 1978 set. 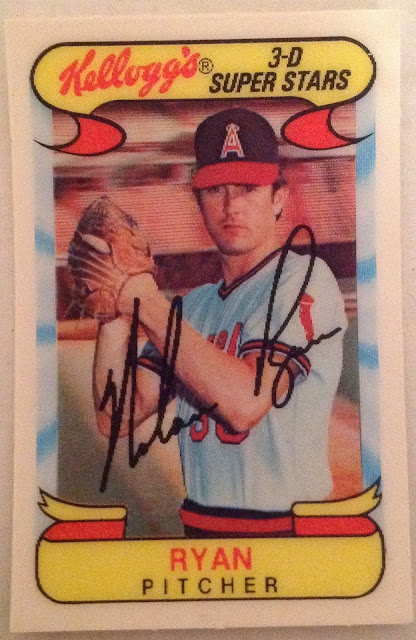 A 1970s Kellogg's set price and interest depends a lot on whether Nolan Ryan is included.  His record from the late 1960s through 1971 show why he didn't appear during the first few years.

Through 1977 he already held the record for the most years with 300+ strikeouts (four) and he's already tied for the most no-hitters (four).

Not on the card - he ended up with seven no-hitters and six seasons of 300+ strikeouts.

Not on the card - I'm not a Nolan Ryan fan, but he led the league in ERA one year with a record of 8-16.  That record got him fifth in the Cy Young voting.  Houston must not have been that good in 1987. 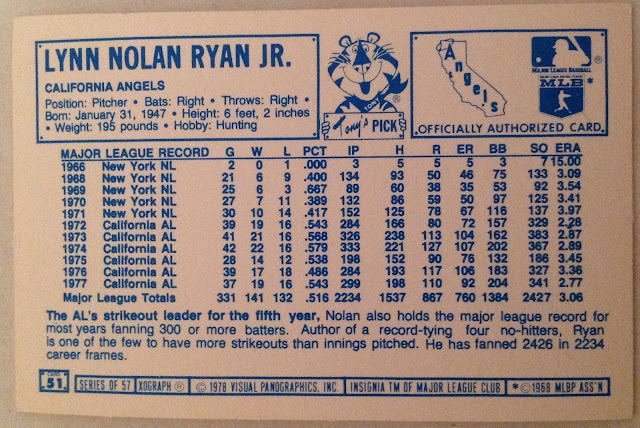 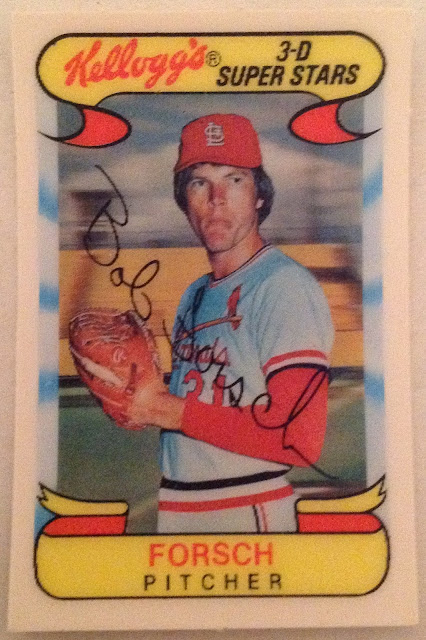 I like the Cardinals logo used during the early years of Kellogg's.

I didn't know that he became a pitcher because he couldn't hit well enough to stick in the minors as a position player.

Not on the card - he hit 12 more homers than his brother Ken did.  Bob won two Silver Slugger Awards with those 12 homers and Ken had none. 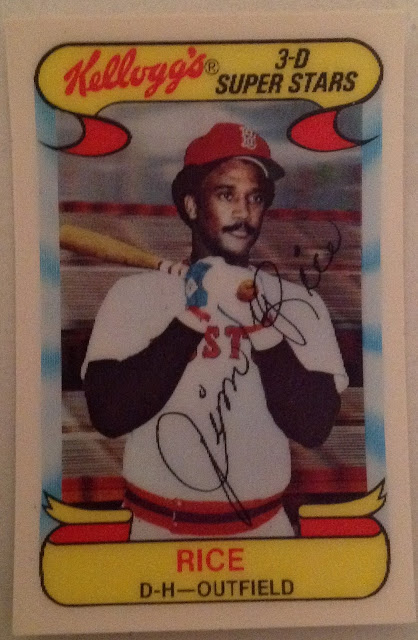 Rice won 10 letters in four sports during high school.  He was injured in September of 1975 so he missed the playoffs and one of the greatest World Series. 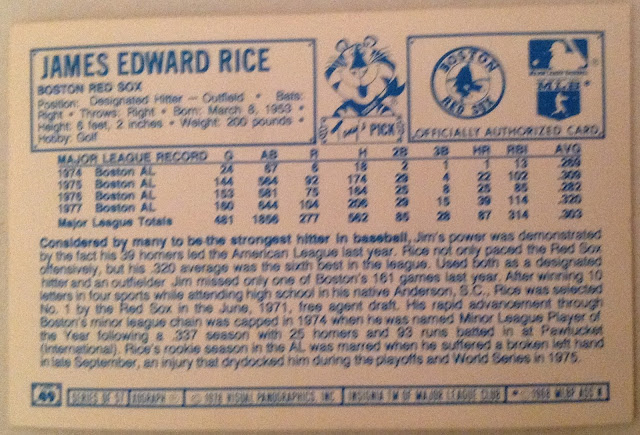 Posted by RunForeKelloggs at 6:43 PM No comments:

I'm back after staying away from the computer with a sore back.  All should be good for running a marathon in two weeks.  Here are the next three Kellogg's baseball cards from the 1978 set. 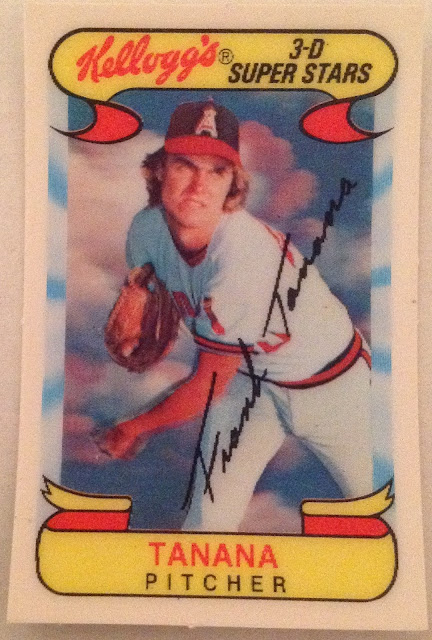 Tanana and Nolan Ryan were quite a duo in the middle of the 1970s.  His arm was "overworked" at the end of the 1977 season so he missed a few starts.  He struck out over 200 hitters for the third year in a row.

He wanted to be known as the best pitcher in baseball. 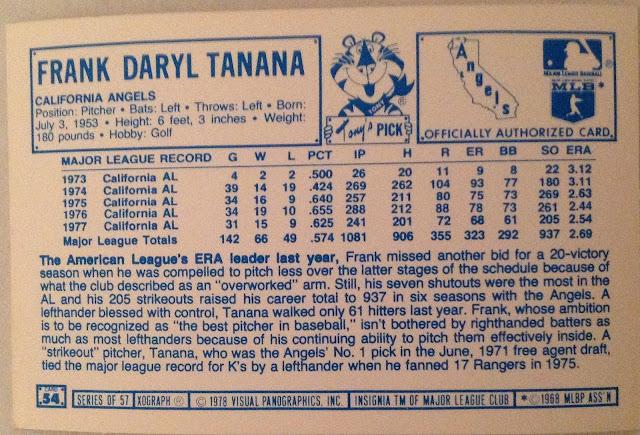 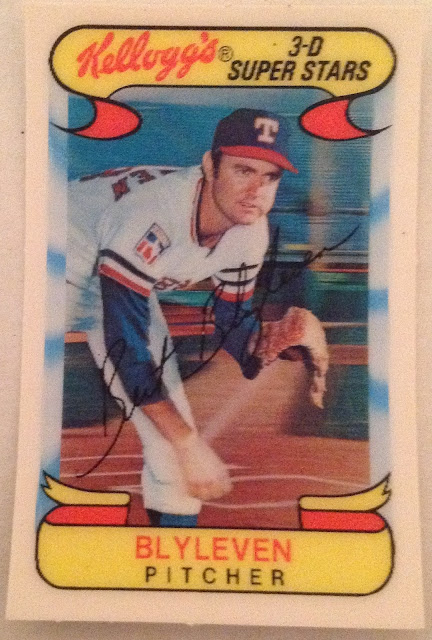 Blyleven already has four one-hitters and a no-hitter.  He was second in ERA to Tanana in 1977.

He was traded after the 1977 season to the Pirates.  Notice the Pirates logo on the back even though he's pictured on the front as a Ranger.

Not on the card - another pitcher with a long career, he pitched from 1970 to 1992.  His career record was 287-250.  He only received Cy Young votes in four seasons - not very Hall of Fame worthy in my opinion. 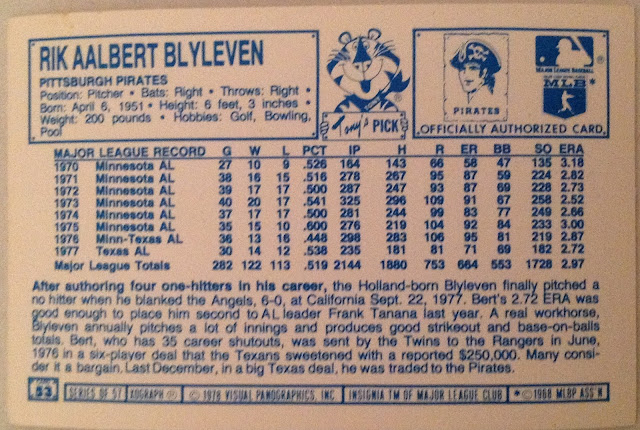 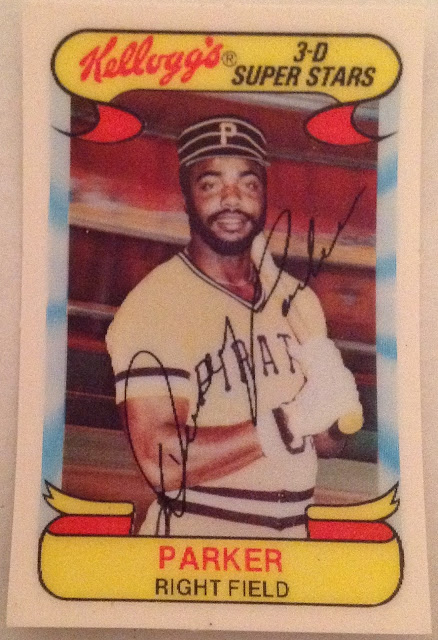 Parker was a huge star in the late 1970s.  He was the 1977 NL Batting Champ.  He struggled with knee and hamstring problems in the past.

He was a three-sport star in high school.  Kellogg's added that many observers expect him to be a star for years to come. 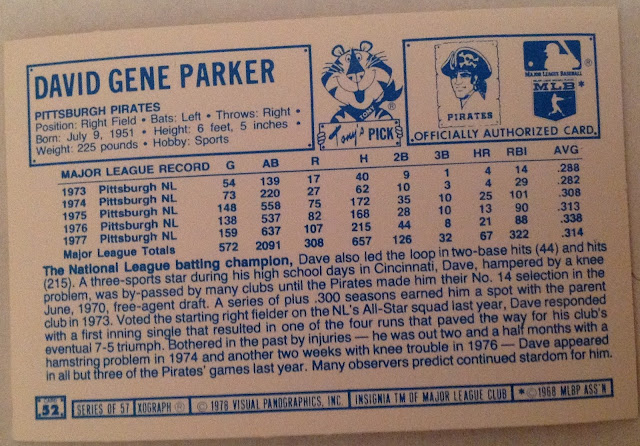 Posted by RunForeKelloggs at 6:35 PM No comments:

I'm finally getting going on the 1978 Kellogg's baseball card backs.  Here are the last three cards in the set. 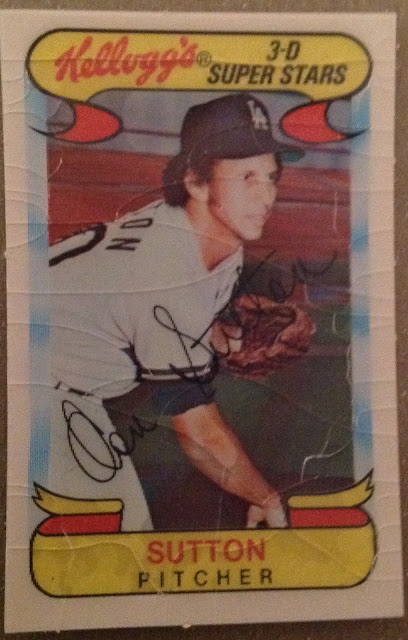 I love these cracked cards, unless I paid for them in EX-MT condition.

They weren't able to add a lot of text about Sutton because he had stats from 1966 to 1977.  They did have room for at least another line of text.

I never thought of him as a star pitcher in the 1970s.  In his first six seasons he didn't have a winning record.  In only two of those seasons did the Dodgers have a losing record. 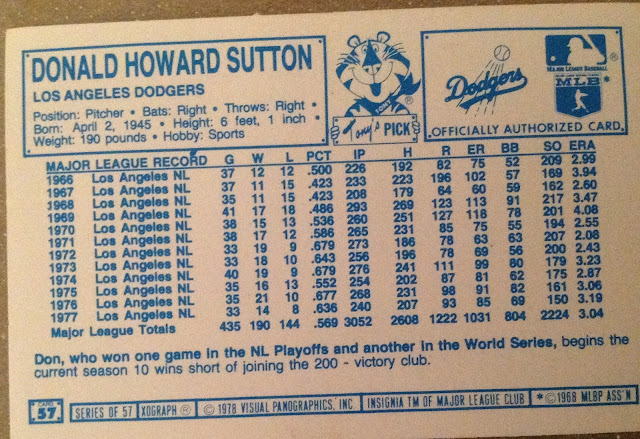 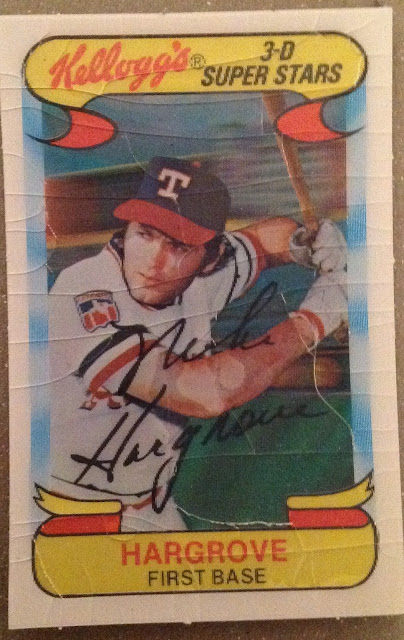 Hargrove had a great start during his first four years.  At this point he had a .303 career average.

Kellogg's says that he "refused" a basketball scholarship offer to pursue baseball.  Northwestern Oklahoma State College was probably NAIA-affiliated in 1972, so they could give scholarships.  Now it looks like they compete in NCAA-D-III.  So, it's not like North Carolina or Duke was looking for the six-foot leftie. 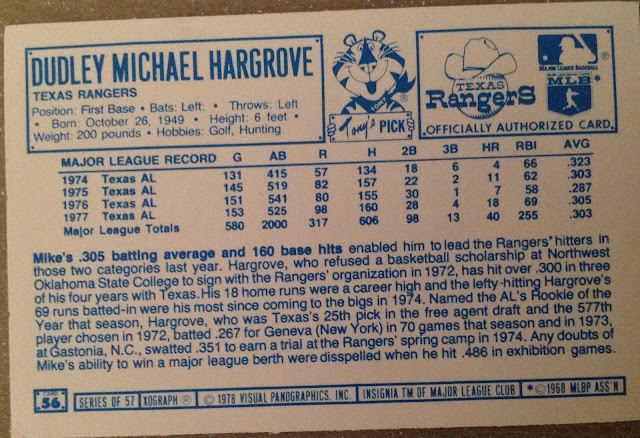 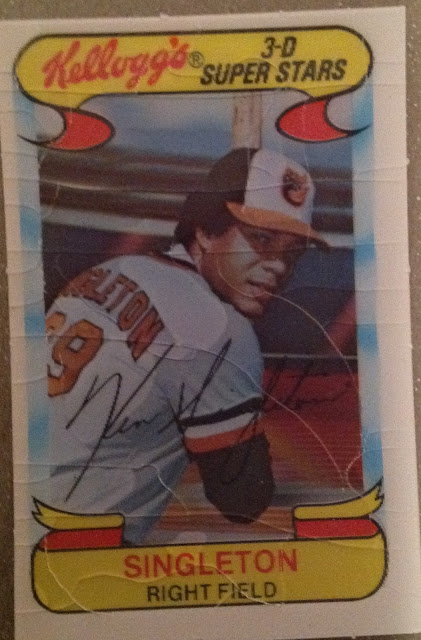 Singleton, at 6-4 has a better basketball height than Hargrove.  He is likened to Nolan Ryan and Tom Seaver - all of whom are mentioned as having great success after leaving the Mets.  They failed to mentioned that Seaver was already a star with the Mets.

Oddly for the 1970s, Singleton has already been traded twice.  He was involved with trades for Rusty Staub and Dave McNally.  The McNally trade was one of the factors in the path to baseball free agency.  To find out more about this visit your local library. 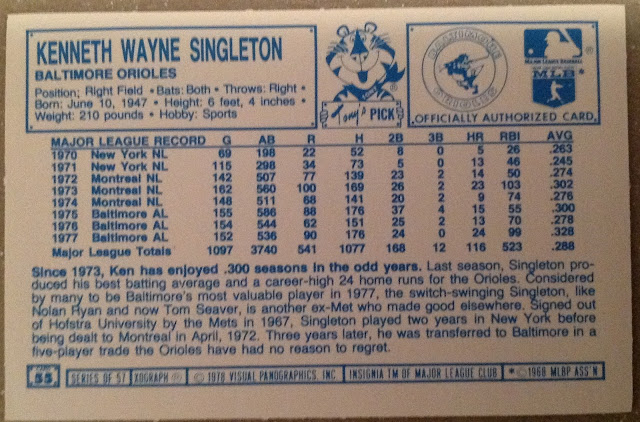 Posted by RunForeKelloggs at 5:55 PM No comments:

1978 Kellogg's Baseball Card Backs - Next Up

Time for me to look into the card backs of the 1978 Kellogg's baseball card set.  Kellogg's took a few chances each year on player selection and they missed on a few guys in 1978. 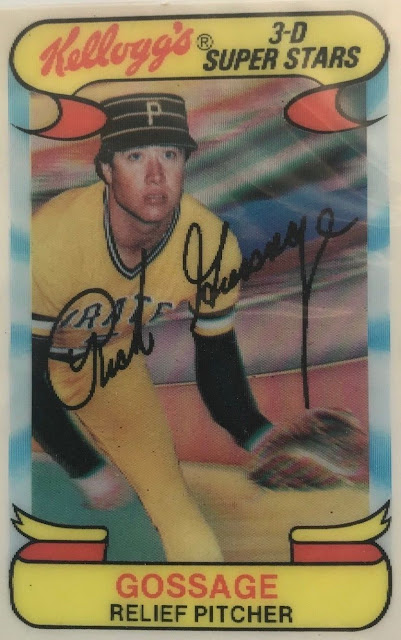 Since I went to Goose Gossage Park in Colorado Springs again this summer I will start with his card.  He was a difference maker for many teams during his career.

I was surprised to see that he only played one season with Pittsburgh.  I knew that he was a Cub for one season and that he played for the White Sox (5 years) and Yankees (7 years) for a while.   As a Cub fan I certainly remember him as a Padre in 1984.  He was with the Padres for four of his 22 seasons.   Add four more teams and he's got a lot of memorabilia just in uniforms. 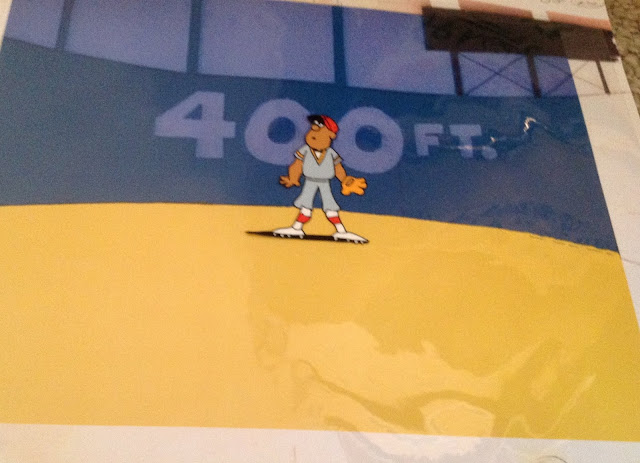 Posted by RunForeKelloggs at 4:53 PM 3 comments:

Was Working For Kellogg's That Good?

I saw an item on ebay that surprised me.  It is advertised as a pin the Kellogg's gave to its employees who have 25+ years of experience.  Check it out here - Kellogg's Employee Pin.

The employee was given a pin that had diamonds on it.  What?

Places that I've worked at give out things like a pen or coffee mug for 10+ years and maybe take it up a bit after that.  Worse, I think that for 15 years you are given a fancy name plate for your desk.  Ugh.

I hope all of you are working hard and getting diamonds instead of coffee cups.
Posted by RunForeKelloggs at 6:52 PM 5 comments: