I only found one Kellogg's card, the Eddie Murray card mentioned yesterday, in a search of dime boxes at a local show.  I am usually too impatient to go through a box for 10 minutes at a show.  The last time I did this a lot was when I bought a VIP pass at the National.  Since I was at that event all day, I eventually found time to look at these bargain bins.

I picked up a bunch of oddball cards from the 70s and 80s including a few Hostess cards and some True Value cards. 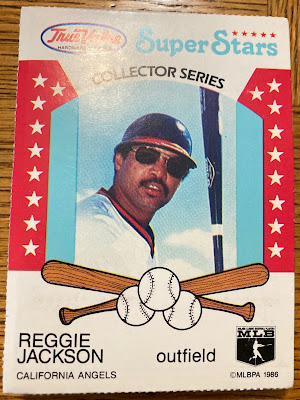 I've gotten these cards before, but it was either just one card or an unopened pack.  The Reggie Jackson card above was part of any entire pack.  I hadn't even opened one of these so I didn't even know how many cards were in this pack.  The photo below shows the three cards that were included in the pack.

There are 30 cards in the set, so I probably have a good number of them now.  No complaints about opening this pack and getting a Cub and one of my favorite former Cubs.

I told my wife that I don't ever remember these cards being issued or how they were issued.  She wasn't surprised and she responded by quickly showed me a honey-do list that has gotten longer all of the time.  You can bet that if Home Depot, Ace Hardware or Lowe's ever produces a card set that I will never mention it at home.

Posted by RunForeKelloggs at 3:00 AM