I've been spending a lot less time with my Kellogg's cards because I am organizing basketball cards to get rid of by either selling, donating or throwing them away.  They sure seem to be popular now, even some of the junk era ones.

Back to thoughts about baseball even though I shoveled a few inches of snow this morning and I will probably be doing that again tonight and tomorrow morning.  When do pitchers and catchers report?

I remember Porter as a Brewer, which shows my age.  He played for Milwaukee from 1971 to 1976.  I didn't remember him finishing his career with Texas for two seasons.  In between he played with St. Louis and Kansas City.  With St. Louis he was the World Series MVP in 1982.  That was all after this card, which shows him with the Royals. 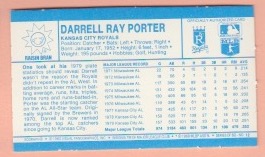 Darrell had career highs in almost all batting categories in 1979 but the Royals didn't win their division.  No wild card, so no playoffs for them.  Porter was named the starting catcher for the AL in the All-Star Game.
Not on the card - he was a four-tme all-star. 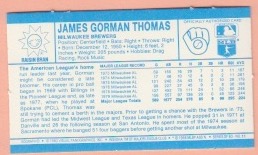 Not many guys have drag racing listed as a hobby.  He probably had a clause in his contract to protect the team's investment should be get into a big crash.
I was surprised to see that he didn't play in 1977.  He was in the minors.  He spent time in the minors from 1969 to 1977 so his MLB career is impressive.  His batting average in the majors give a big hint as to why he was in the minors so long.
He did lead the league in homers in 1979.  He led the minors a few times too, including having 51 homers in 1974.
Not on the card - he led the league in homers again in 1982 and he topped 100 RBIs three times.

This is one of my favorite pictures, but I am here to talk about the back of Howard Sutter's card.  Since he was a Cub we all knew that his real name was Howard not Bruce. 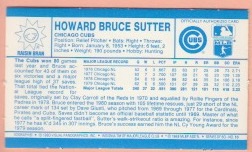 Bruce's 37 saves and six wins accounted for over half of the 80 wins that the Cubs had in 1979.  The 37 saves tied the NL record.  Managers didn't pad the save stats like they do today.  Sutter pitched in 62 games and logged over 100 innings.
He finished 56 of the 62 games that he pitched.  Given time, I'd like to find out about the six games that he didn't finish.  Was he knocked out?  Did the game continue and the Cubs used a pinch-hitter?  Did the game go into lots of extra innings?
Sutter blew a save in one game but he pitched the entire 7th through 11th innings giving up two runs.  That game went 18 innings.  I found an 11-inning game where he pitched the 8th and 9th before being lifted for a pinch-hitter.  That's two.  He pitched the 9th through 11th in a game before pitcher Ken Holtzman pinch-hit for him in the 12th.  That's three.  Another one he pitched two innings before being pinch-hit for in the 10th inning.  That's four of six.  Another one - pitches 2 1/3 before being pinch hit for in extra innings.  And I found the last one.  Sure enough he pitches two innings and is replaced for a pinch hitter in the ninth inning of an extra inning game.
He went the entire season without being taken out in the middle of an inning?  Kind of.  He did blow saves in most of those six games mentioned above.  And he did lose a few games in the middle of the last inning when the Cubs were on the road.
The card mentioned a pitch that Sutter calls a "split-finger fastball".  That was a new pitch.
I like that the card reminds us that the save was not an official statistic until 1969.

Sutter won the 1979 NL Cy Young Award but one of his six losses came as the Cubs lost 23-22 to the Phillies in a game that is shown on television each winter.  He gave up a homer to Mike Schmidt in the 10th inning after the Cubs rallying from being behind 17-6 in the fourth inning.

Posted by RunForeKelloggs at 11:40 AM