Slowly working my way through this set.  I'm spending some time getting rid of lots of my newer basketball cards, especially those from 2000-01 Fleer Ultra since I have lots of them.  My age shows when I call 20-year-old cards newer.

Time to check out the next three cards to end my evening.  I'm ready to work on another set, hopefully one with larger printing on the back.

Anyone was happy to get a Jim Palmer card from any year and getting his card from a box of cereal was just as good.
Palmer had a series of injuries in 1979.  By this time he had four consecutive 20-win seasons - twice.  He was the youngest pitcher to throw a shutout in a World Series game.
Not on the card - he still holds that distinction.  The way pitchers are handled today he may hold that honor for a long time.
Not on the card - the injuries mentioned remind me of something I saw on television last week.  I stopped channel surfing to watch an old Cub game because Bill Murray was announcing.  There were two different updates during the game about Palmer being rushed to a hospital.  I remember that being a big deal at the time. 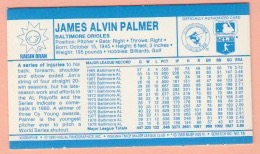 Carlton was a force, just like Palmer, but Palmer was seen a lot more on television - I don't mean that just because he kept showing up wearing only his Jockey underwear. 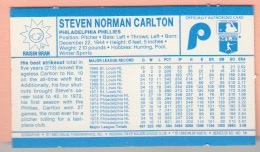 Lots of the basics on the back.  He's #10 on the all-time strikeout list.  He won 27 games for the last place Phillies in 1972.
Not on the card - Carlton's debut was five days before Palmer's.
Here are some stats that you won't see much of with current pitchers.
Complete Games - Palmer 211, Carlton 251
Shutouts - Palmer 53, Carlton 55
#13 - Roy Smalley 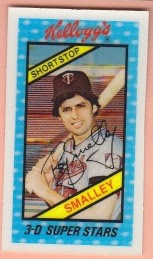 Smalley gets one of the longest paragraphs because he's not got the career that started in 1965 like Palmer and Carlton.  Roy wasn't even in high school yet in 1965. 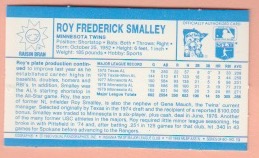 He was the starting shortstop in the All-Star game and had career highs in most batting categories.
I knew that his dad played from a Topps Father-Son card but I didn't know that his manager, Gene Mauch, was his uncle.
Not on the card - he played until 1987 but he couldn't improve on the career marks he set in 1979.  He didn't get into another All-Star game.  That's understandable when the guys who were named all-stars in the 1980s included Dent, Yount, Ripken, Trammell and Fernandez.

Posted by RunForeKelloggs at 8:03 PM